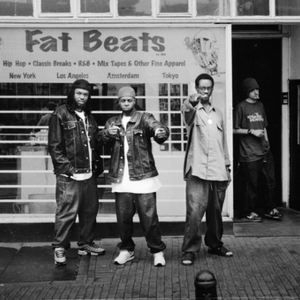 When Slum Village emerged in the late 1990s, the highly regarded Detroit trio of T3, Baatin and Jay Dee made a startling admission: their group was a liquid association with members coming and going during the group's evolution. True to their word, Slum Village has already gone through a number of line-up changes. Rapper-producer Jay Dee left after the group's first national album, 2000's Fantastic, Vol.

Rapper-producer Jay Dee left after the group's first national album, 2000's Fantastic, Vol. 2 (Barak) and rhymer Elzhi was added to the mix for 2002's Trinity (Past, Present And Future) (Barak/Capitol). Now, with the release of Slum Village's new album, the stunningly impressive Detroit Deli (Barak/Capitol), the group consists of just T3 and Elzhi. Throughout the changes, Slum Village's musical mission has remained constant: to deliver soul-stirring sonics that represent Detroit to the fullest. That vision is fully realized on Detroit Deli. Throughout the sensational 15-cut collection, T3 and Elzhi give listeners an intimate look at life in The D, from where they shop, hang with friends and eat to the type of cars they drive (check "Zoom") and what clothes they wear.

Slum Village represents the Midwest's funk heritage on the inspirational "Do You," which was produced by Jay Dee, and teams with Chicago's Kanye West on lead single "Selfish," a sly, piano-driven song where T3, Elzhi and West rap about their desire to have a monopoly with women. They then team with Ol' Dirty Bastard on the riotous "Dirty" about having to battle for a woman and deliver a Player's Hand Guide of sorts on the sensuous "Count The Ways," Both produced by B.R. Gunna.

Even though Slum Village excels at making this type of lighthearted music, they show on Detroit Deli that they also hit hard with more serious subject matter. On the moving, guitar-driven "Keep Holding On," they rap about people not losing faith in their lives, while on the stirring "old girl/shining star," T3 and Elzhi send a open letter of hope and support to single mothers working hard to survive.

"The inspiration came from my boy's niece who has a gang of kids and is out here struggling," Elzhi says. "She's stringing her kids around on the bus, just to get by. By me just looking at that, I'm like, 'I need to write a song because I know she's not the only one going through it.' Slum Village has never touched on ladies like that and everybody is calling girls hoes and Bs, dissing these ladies, so we wanted to touch the ladies in a different way."

The group also takes a different route on "Reunion." Jay Dee joins T3 and Elzhi on the insightful cut, which offers three different takes on the group's status. "It's like you're going through three state of minds at one time kind of in reverse," T3 says. "What we're trying to say is that we wish we were together, we might be together and then we're not together at all. We're trying to give you all the aspects of how people are coming at us, the type of stuff we're dealing with and kind of give you a glimpse of the stuff we're dealing with in the group."

Indeed, songs such as "Keep Holding On," "Old Girl/Shining Star" and "The Reunion" signal Slum Village's evolution; they mark the first time the group has let listeners in on their personal feelings. "I don't think people really know us and we never really touched on our emotions like that," T3 says. "We wanted to bring some realness, besides just the soul music. Elzhi, as a guy that saw Slum Village on the outside, he brought it to my attention that we never touched on serious topics and that we should try to touch on them more. I was with that and I have a lot to say, so why not?"

Detroit Deli also stands as Slum Village's most musically rich album to date. B.R. Gunna producers Black Milk and Young RJ, both 20 years old, handled the majority of the beats, while Kanye West produced "Selfish," Jay Dee handled "Do You" and T3 along with young RJ produced "Closer" and "Count The Ways." The beats are as divergent as the album's subject matter, ranging from soulful to futuristic, but they always remain powerful and innovative.

The same can be said for Slum Village's storied career. After releasing Fan-Tas-Tic Vol. 1 independently, Slum Village became one of hip-hop's hottest groups. While working on Fantastic vol. 2, they were joined in the studio by such luminaries as D'Angelo, Busta Rhymes, Kurupt, Pete Rock, and A Tribe Called Quest's Q-Tip, among others. The resulting album became an underground classic and Slum Village was seen as the second coming of the Native Tongues (A Tribe Called Quest, Jungle Brothers, De La Soul) by member Q-Tip, as well as fans and journalists alike.

Jay Dee left the group after Fantastic, vol. 2 in order to work on his solo career, but Slum Village pressed on, releasing in 2002 the Dirty District mixtape and later that year its third album and first with new member Elzhi, Trinity. Many fans looked at rapper-producer Jay Dee as the group's backbone, but Trinity proved that Slum Village could provide without its sonic architect, as that album's single "Tainted" became the group's biggest hit.

"We've always stuck to our guns," T3 says. "We've never tried to change to get commercial success. We always just did what we did and when you do what you do, eventually somebody's going to have to give you your respect for having the courage to do what you do."

Now back where they started, Slum Village yet again thrills and delights fans and gains yet a larger audience hungry for the smoking beats under the hot lyrical talent of T3 and Elzhi. Slum has begun to bring more of their personal feelings to their music, allowing the listeners and fans to touch more on the emotions and realness and touched on more serious topics. Prequel to a Classic features previously unreleased joints and jams from Slum Village with production by B.R. Gunna, J Dilla and Kareem Riggins. The mixtape gives listeners the best of some of their material since Fantastic Vol. 1.

T3 has said in a recent interview that slum village has reunited with Baatin and has added Illa J(J Dilla's Brother) to bring a Dilla effect. He is quoted "Slum Village is totally not that at all,? T3 adds. ?I'm incorporating Baatin, and I'm putting Illa J in?not to take Dilla's place, but just to have that essence of Dilla on this new project. I'm pulling together all the producers that we've used before?Black Milk, Wajeed , Kareem Riggins, Pete Rock and all the people who have been down with SV from day one.?

J Dilla died on February 10, 2006 after being diagnosed with TTP and Lupus.

The Dirty Slums (With Mick Boogie)

Prequel To A Classic