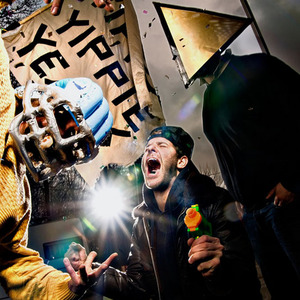 Deichkind is a German band from Hamburg, which was founded in 1999 and originally consisted of MC Malte, Philipp, Buddy and the producer Sebi who died in february 2009. DJ Phono supports the band at their live shows. Their lyrics are often humourous. The band first burst onto the German music scene in 2000 with their hip hop album "Bitte Ziehen Sie Durch". "Noch F&uuml;nf Minuten, Mutti" followed in 2002.

MC Malte left the band in the summer of 2005, whereafter the group focused more on a style of music which they describe themselves as techrap (techno/rap).

In 2006 the album "aufstand in schlaraffenland" was released and Deichkind made a row of legendary performances at open air festivals in costumes fashioned out of duct tape, foil, flashing lights and inflatable toys. The song "remmidemmi (yippie! yippie! yeah!)" describes a house party that gets out of control and has become an urban hymn among German party-goers.

One of their most scandalous performances was at the Melt! festival in 2006 where the band spontaneously invited fans to join them on stage. Over 400 people jumped at the chance to party with the band to the song "Remmidemmi" (->youtube).
As of april 2008, Buddy has left the band to embark on a solo career and has been replaced by Ferris Hilton, perhaps better known as Ferris MC.
After the death of band member and producer Sebastian "Sebi" Hackert on Febuary 21st 2009, Deichkind is not sure if they will be able to continue working together. He died at the young age of 32.