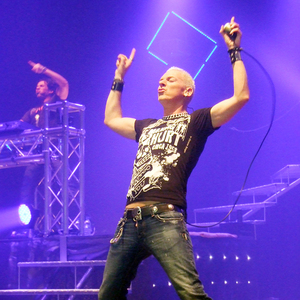 There is more than one artist with this name: 1) Scooter is a German group, formed by Soren Buehler, Hans-Peter Geerdes, Hendrik Stadler and Jens Thele, in Hamburg in 1994. Among their more well known hits are 'Ramp! (The Logical Song)', 'Move Your Ass', 'Fire', 'How Much Is The Fish?', 'Nessaja' and 'Weekend!'. Originally the group started as a side project in 1994. Their debut single Vall?e De Larmes (French for Valley Of Tears) reached #8 on the German dance chart.

1) Scooter is a German group, formed by Soren Buehler, Hans-Peter Geerdes, Hendrik Stadler and Jens Thele, in Hamburg in 1994.
Among their more well known hits are 'Ramp! (The Logical Song)', 'Move Your Ass', 'Fire', 'How Much Is The Fish?', 'Nessaja' and 'Weekend!'.

Originally the group started as a side project in 1994. Their debut single Vall?e De Larmes (French for Valley Of Tears) reached #8 on the German dance chart. In April of that year, Scooter played their first live show in Hamburg, Germany, where vocalist Hans-Peter Geerdes began freestyling off the top of his head to an instrumental dance track. At that point, Scooter officially became a group, and Geerdes' rapping would become one of the band's trademarks together with the fact that they all of their tracks are in fact remixes, though often with different titles than the original tracks.

They have a sort of 'trademark' style of dance, with most of their songs featuring some "rap shouting", sometimes featuring a high pitched vocal, which is evident especially on their biggest hit 'RAMP! (The Logical Song)' (which samples 'The Logical Song' by Supertramp). Much of their music features elements of a live performance, including the roar of the crowd, and the echoing sound of Geerdes' voice.

Scooter's style would also appear to harp back to that of The KLF, especially so with the track entitled "Posse! (I Need You On The Floor) - with a sample which recurrs throughout the work of The KLF. KLF references are also frequently used in Scooter songs. Both bands have released singles with the title "Fuck the Millennium": KLF in 1997 under the pseudonym 2K, and Scooter in 1999. Relatively lenghty and complex samples used in KLF tracks have often surfaced in Scooter tracks, such as the entire opening seconds of the KLF's 3am Eternal being used to open Hello (Good to be Back) by Scooter.

On September 9th, 2005, Scooter performed their first concert in North America at the Allstate Arena in Chicago, Illinois along with opening acts such as DJ Markski (Chicago), DJ Erikk, Aquagen, and Benassi Bros. It was here that the latest single at the time 'Hello! (Good To Be Back)' was played to the public for the first time.

Most recently Scooter went on their latest tour entitled 'Who's Got The Last Laugh Now?' Tour 2006, named after the latest studio album. After the tour they released a CD and 2 disc DVD entitled 'Excess All Areas', containing the final concert of the 2006 tour on one disk, and every single video for every single release on the other.

Following the success of the jumpstyle anthem "The Question Is What Is The Question?", top ten hit number 20 for the band, the 18th album "Jumping All Over The World" by the Hamburg combo was released in April 2008. It was their first album release for 5 years in the UK yet went in straight at number 1, displacing Madonna's 'Hard Candy'.

In 2009 Scooter have continued to grow under All Around The World. They released J'Adore Hardcore, followed by their second studio album Under The Radar, Over The Top.

2) Scooter is a Belgian 80's band, known by their hit single 'You' (voted for being the best Belgian production of 1981).
Scooter started in 1979 with five musicians from the Antwerp Rockscene as "Scooter on the road".
More info on http://houbi.com/belpop/groepen/scooter.htm

3) Scooter is a band from Hamilton, New Zealand. Made up of the remnants of bands that had already left town, Scooter are Stan Jagger (drums), Kent Ericksen (guitar, vocals) and Steve Gray (guitar). They formed in 1994 and began performing live at Bossa Nova Cafe in 1995, and have continued to play live as recently as 2006.

In 1996 they released the track When We Go Out on a free CD given away with Sync magazine. They had the song Cranky American on Green Eggs and Hamilton, released in 1997, and in the same year covered Platypus by The Clean on the tribute album God Save the Clean (FNCD409). Their involvement with the project led to a TV appearance performing at the album's release party at Auckland's Power Station.

In 1998 they released a self titled debut EP (Scooter), including the songs Dayroom and Maybe and toured the country from end to end in support of the EP's release. Dayroom and Maybe appeared on the promo CDs NZ on Air Indie Hit Disc 6 and 7, respectively, in 1998. The following year they released the single Book 'Im Danno and again toured both the North and South Islands of the country to promote it. In 2000 Book 'Im Danno appeared on the promo CD NZ on Air Indie Hit Disc 12, and in 2001 the same song appeared on the Year Zero compilation.

4) Scooter is a Muppet from Jim Henson's "The Muppet Show". His character was primarily that of the show coordinator, making sure everyone got on stage on time. He has also appeared on several Muppet albums.

5) Scooter is the producer of a weekly Texas political satire program "The Inner Side", featuring mixes of music and voices in the news, available for download at acksisofevil.org