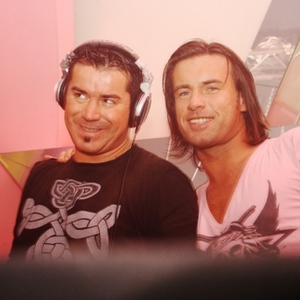 Voodoo & Serano are a hard house group. Their best known track is probably Blood Is Pumpin', which was one of the many influences of New Order's Confusion (Pump Panel Remix) used in the nightclub scene in the film Blade. DJ Voodoo and Tommy Serano have long outgrown the status of 'newcomers' or 'unknowns'. By now they have established themselves solidly amongst the elite DJ Stars and have become Hit Record Producers to boot. DJ Voodoo started his DJ career at the end of the 80's.

DJ Voodoo and Tommy Serano have long outgrown the status of 'newcomers' or 'unknowns'. By now they have established themselves solidly amongst the elite DJ Stars and have become Hit Record Producers to boot. DJ Voodoo started his DJ career at the end of the 80's.

Until the mid Nineties he was spinning almost exclusively in Bavaria gaining profile as somewhat of a Missionary in the slowly emerging techno scene.

In 1995 he moved to Ibiza and became a resident DJ at the famed Privilege Club for the whole summer season.

The year after he moved over to El Divino Club as their resident DJ. It didn't take long for DJ VooDoo to establish his name on the International circuit. In 1997 he decided he had enough of the Ibiza lifestyle, returned to Germany and finished his college education with a Major in Electro-Technics and an Engineers' certificate.

Still, that same year, the sunny island of Ibiza lured him back and he has been maintained his residency at the legendary Club Space ever since. For the last three years now, DJ Voodoo has been performing his magic in many of the Top Clubs around the world while perfecting his production skills with many successful Hit records to his credit.

Tommy Serano also has been in high demand in Bavaria's Clubs for more than a dozen years. From 1994-1998 he doubled up on his DJ activities as General Manager of a Big Room Disco in Bavaria and as host of his own TV Show on one of the local stations.

In 1995 he paid his close friend DJ Voodoo a visit in Ibiza and has now joined the resident DJ crew at Space. His reputation has spread and he has become a popular guest DJ around the world and also has scored considerable success as a record producer.

Their first joint production under the name VooDoo & Serano became an instant major success. 'Blood Is Pumping' stayed in the Pop Charts for many weeks in Germany and managed a #19 position in the UK as well. Their follow-up Single 'Slide To The Vibe/ This Is Acid' followed suit by not only becoming a major Club success but also climbing up the Pop Charts in a number of countries.

VooDoo & Serano clearly have established themselves as a Hit Duo. Following on the heels of their last Single 'When I Rock' their brandnew and long awaited new Hit 'Overload' is finally about to be unleashed. The two of them have taken their time in refining their unique sound to perfection, and the result is spectacular and unmistakable. 'Overload' is a major Anthem you won't be able to get out of your head. Using full vocals for the first time adds the final touch making this their most potent offering for commercial success at Radio and Television.

There is no doubt that VooDoo & Serano's sound is constantly evolving all the time, each new track is different from the last. However the thing that stays the same is that they all sound huge in clubs and rock the crowd wherever they are played.

The new single 'This Is Entertainment' marks another change in the sound of Voodoo & Serano, it is full of punky attitude in the contemporary style of Moguai. Who knows what the guys will do next, but on the evidence of what they have done so far it's going to be exciting ? that's for sure.

This Is Entertaiment (Maxi)

Give Me The Power (Maxi)