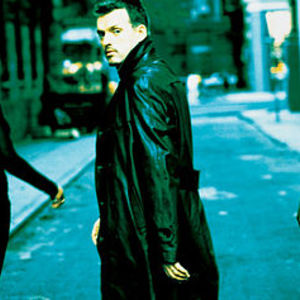 Real McCoy, originally known as M.C. Sar & The Real McCoy, was a German Eurodance group, who are best known for their international hits Another Night in 1993 and Run Away in 1994. Real McCoy was the brainchild of German rapper and producer Olaf "O-Jay" Jeglitza. After having released a few limited edition 12" singles in Germany under the name "The Alliance" with friend Frank "Quickmix" Hassas, their first major breakthrough came in December 1989 when a cover of the Technotronic hit "Pump Up The Jam" went to #16 on the German singles chart.

Real McCoy was the brainchild of German rapper and producer Olaf "O-Jay" Jeglitza. After having released a few limited edition 12" singles in Germany under the name "The Alliance" with friend Frank "Quickmix" Hassas, their first major breakthrough came in December 1989 when a cover of the Technotronic hit "Pump Up The Jam" went to #16 on the German singles chart.

At this point, the act was faceless so for the second single, the original track It's On You, singer Patsy Petersen and 'rapper' Shampro were enlisted to join the group. O-Jay felt uncomfortable being the frontman so Shampro mimed O-Jay's raps. The single, on its release in 1990, climbed to #11 in Germany. An album "On The Move" was also released.

After this things went a little quiet for a while until they hooked up with David Brunner, Head of A&R at Hansa Records. He was impressed by a song O-Jay had co-written called "Another Night" but was dissatisfied with Patsy's vocals.

Convinced he had a hit on his hand, Brunner persuaded O-Jay to let him release the new version of "Another Night" with Patsy (miming Karin Kasar's vocals) and O-Jay to replace Shampro as the new "M.C. Sar & The Real McCoy". It was a #18 hit in Germany in 1993 and all over continental Europe, followed by the album "Space Invaders" but then Clive Davis at Arista Records in the USA showed some interest. He had already had success taking Ace of Base to the States and now wanted to do the same with a re-branded Real McCoy.

A new video was made, another singer Vanessa Mason was found to form a trio and the single shot to #3 on the Billboard Hot 100 in late 1994, also reaching #1 on Radio & Records magazine's CHR/Pop Airplay chart. It was also re-released in the United Kingdom, where it had only reached #61 the previous year. This time it was far more successful and within three weeks had climbed to #2, selling more than 312,000 copies and also reached #1 in Australia. The Follow-up, Automatic Lover (Call For Love) reached #52 on the Billboard Hot 100, #10 in the UK, and #5 in Australia. "Run Away" became the follow-up single to "Automatic Lover"; it became the groups second #1 single in Australia and also got to #3 in the USA in early 1995 (and #6 in the UK). A freshened-up US album called "Another Night" was released, with some new tracks, also with vocals by Karin Kasar, and Real McCoy were awarded Best New Act at the American Music Awards in 1995.

Love & Devotion was a #11 hit in the UK in April of that year, and Come and Get Your Love, a cover of the song by Redbone, peaked at #19 on both sides of the Atlantic ending a great year for the act. Shortly afterwards, Patsy left the act and was replaced by Lisa Cork.

In 1997, Real McCoy returned with a new single and album called One More Time, this time with Vanessa Mason and Lisa Cork actually performing on the record. The album was co-written with American songwriter/producer Brent Argovitz who brought Lisa Cork into the band. The single itself was released in many nations around the world on vinyl and CD-Maxi Singles with a total of 18 remixes amongst all the releases. One More Time (the single) peaked at #27 on the Billboard Hot 100. It became a Top 20 hit on both Rhythmic/Dance format radio and on the Hot Dance Club Play chart. However, "One More Time" completely missed the UK Top 75. A few other singles were released such as a cover of the Shania Twain hit, (If You're Not In It For Love) I'm Outta Here! and I Wanna Come (With You) (which "Bubbled Under" the Hot 100). Before long the group disbanded.

Although the group decided to stop recording together, a completely new line-up were hired to form a "new" Real McCoy in 1999, much like the producers of 2 Unlimited had done a year earlier. Jason, Gabi and Ginger recorded a brand new version of the 1990 hit It's On You, which was released only in Germany, Austria and Switzerland. In 2000, they also released a new song titled "Hey Now". Both singles failed to chart.

O-Jay went on to produce and re-mix for several German artists such as Yvonne Catterfeld, B3, Daniel K&uuml;blb&ouml;ck and ATC.

In 2003, O-Jay released a solo CD single under the A45 record label (Germany) with several mixes of his winning eurodance formula called "Nite to Remember", a song very reminiscent of the Real McCoy tracks with his rap and female vocals.

Several "greatest hits" compilations have been issued in recent years, and O-Jay started his own weblog in 2004, in which he finally revealed that the group's biggest hits had in fact been performed by Karin Kasar. He has also speculated that yet another Real McCoy group was being lined up without his permission, but so far they have not been launched. O-Jay still performs under the name Real McCoy and collaborated with Ich Troje to represent Poland at the Eurovision Song Contest 2006. The song, Follow my heart, failed to qualify for the grand final.

In early 2007, O-Jay started a new record label, Phears Music, with a distribution partnership with Sony BMG in Germany. He also released a brand new four track digital single "People Are Still Having Sex", a cover of LaTour's 1980's house hit, in anticipation of a new album and tour for Real McCoy in 2008.

Come And Get Your Love (CDS)

Come And Get Your Love (Single)