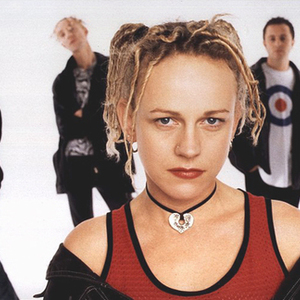 Formed in 1991 in Essex, England, Sunscreem was one of the first rave-pop groups with live performance abilities as well. Formed around Paul Carnell and Lucia Holm (both vocals and keyboards), with a handful of contributors including Darren Woodford and Wayne Simms (guitars), Rob Fricker (bass) and Sean Wright (drums), among others. Lucia Holm was a session cellist, and when she met Carnell at a warehouse rave in Essex they agreed to form a band.

Early independent singles and "Walk On" and "Pressure" were medium hits in Britain, and in 1993, "Love U More", and "Perfect Motion" from their debut album, 03 (which got major distribution by Columbia/Sony), became their trademark song and biggest hit to date. They were heavily remixed and bootlegged at the time, with Perfect Motion (Boys Own remix) a stand-out track.
Despite their disappearance from the charts since mid-90?s, Sunscreem are still active, and released some more albums since then: Change or Die (1996), Ten Mile Bank (2001) and the collection Looking at You: Club Anthems, among others.

Looking At You - The Club Anthems

Out Of The Woods