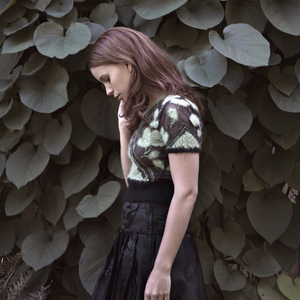 Marit Elisabeth Larsen was born on July 1, 1983 in L?renskog, Norway. She gained international fame during her teenage years as a member of the pop duo M2M with childhood friend Marion Raven. Larsen played the guitar and did half of the vocals and songwriting. After touring the world and producing two albums with hits such as Don't Say You Love Me, Mirror Mirror, and Everything, M2M was broken up by Atlantic Records in September 2002.

She released her debut album, Under The Surface, in Norway on March 6. The first single, Don't Save Me , made radio impact on January 3, 2006, and quickly climbed into the top ten on many Norwegian charts and playlists. After the physical single release on February 6, 2006, Don't Save Me jumped to #1 on the official Norwegian singles chart in its second week of availability, and then spent five consecutive weeks in the top spot. The second single released from the album was the title track Under the Surface. The video was released May 10, 2006, and within a month the single became the most widely played track on Norwegian radio.

Only a Fool was the third single from the album but it spent only two weeks on the charts and was only a radio release. The heartbreakingly painful Solid Ground was the last single from the CD. It was released in March, 2007 and after several weeks, it reached #1 on Norwegian Radio Charts without needing the promotion of a music video.

Under The Surface, which was released in Norway on March 6, 2006, contains 11 songs, most of which were written by Larsen. Touted as "what many people consider to be the most eagerly awaited album of 2006" (according to Norwegian magazine, Plan B), the record debuted at #3 on the sales chart in her native Norway. On March 31, 2006, after just three weeks of sales, Under The Surface became a certified gold record in Norway, selling over 20,000 copies. In late 2006 and early 2007, the album won Larsen other accolades, including the award for Best Norwegian Act at the MTV Europe Music Awards, and the Spellemannprisen (Norwegian Grammy) awards for Best Female Artist and Best Video (Don't Save Me). After Larsen's Spellemannprisen victories in January 2007, the album crossed the 40,000 copy mark, qualifying it for platinum certification. It was later announced in May 2007 that the album had reached double platinum status. In addition, Larsen was the most played artist on NRK P3 Radio in 2006, with her three singles (Don't Save Me, Under the Surface, and Only a Fool) being played collectively more than 880 times.

The first single from The Chase, entitled If a Song Could Get Me You, shot to #1 on the Norwegian singles chart in its first week of sales in August 2008, and was later nominated for the Spellemannprisen award as Hit of the Year. The second single was I've Heard Your Love Songs (released October 27, 2008), and another song from the album, Steal My Heart, was used in the soundtrack of the Norwegian movie I et speil, i en g?te.

Early 2009, Larsen joined Jason Mraz as an opening act for his European spring tour. She was invited by Mraz when they met each other during the Nobel Peace Prize concert in 2008.
Larsen released If A Song Could Get Me You as her first single outside Norway. It was released in Germany, Austria and Switzerland. In Germany and Austria it became a number-one single. In Switzerland it peaked at #2.

On November 24, 2009, VG -a Norwegian newspaper- made a list of the best Norwegian songs of the past decade 2000-2009. Under the Surface was judged as the best song of the decade, making her 1st place on the list. Her song If a Song Could Get Me You came in 4th place and her album Under The Surface gets 2nd place for the best album of the decade.

When The Morning Comes

If A Song Could Get Me You