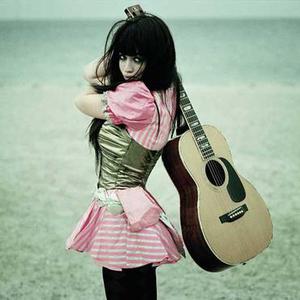 Maria Louise J?nsen (born January 21, 1985 in Copenhagen), professionally known as Aura Dione, is a Danish singer-songwriter of Faroese, Spanish, French and Danish origin. In 2008 she released her debut album, Columbine which as of 2011 has sold 100,000 copies worldwide. The album spawned the hit single "I Will Love You Monday (365)" which reached number one in Germany, and was certified platinum for shipments of 300,000 copies.

Her Faroese-French mother and Danish-Spanish father introduced her to music, and the first song was written when she was as young as 8 years old. Her parents were hippies and sailed around of the oceans of the world with her as a child until the 7-year-old was given residence on Bornholm, Denmark. Here she began her schooling and was enrolled as a teenager in high school, but in the middle she chose to move to Australia where she sought inspiration from the Aborigines. This resulted later in the song "Something From Nothing", which was chosen as "Unavoidable Track of the Week" by the biggest Danish radio station, P3.

Aura released her second international studio album "Before The Dinosaurs" on November 4th, 2011. The first single release "Geronimo" was produced by David Jost and went straight to the #1 in the official German Media Control Charts. In the very same year Aura Diona won an European Border Breakers Award for her international breakthrough.