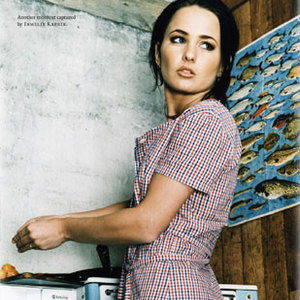 Sophie Zelmani (born 12 February 1972 as Sophie Edkvist) is a female singer-songwriter from Stockholm, Sweden who debuted in 1995 with the single Always You. Her music is quite unique in Swedish music history, since it's based on the American singer/songwriter tradition. Sophie also appears on the Dawson's Creek soundtrack with her ballad, I'll Remember You and has since recorded 7 albums. Upon recording a few songs at a local studio, she decided to send the demos to three record companies, with no special expectations.

Upon recording a few songs at a local studio, she decided to send the demos to three record companies, with no special expectations. Soon Sony Sweden gave her a phone call and offered her a record deal. At this stage, she had never played in front of an audience. Sophie started to record her self-titled debut album in 1995. The album was produced and arranged by Lars Halapi, a long time collaborator who has subsequently worked on all her material.

She was awarded a Grammy at the Swedish Grammy awards as Best Newcomer in 1995, she was also nominated for Best Female Pop Singer. Her album managed Gold status both in Sweden and Japan. After promoting her debut in the US, she finally started to work on her new album in the Autumn of 1997. This second effort entitled Precious Burden came the following year. Since the turbulence of the first album release, Zelmani has started saying no to interviews and only embarks on tour for short periods of time.

The third, fourth and fifth albums, Time To Kill (1999), Sing And Dance (2002) and Love Affair (2003) quickly followed. Ten years after her debut she released a best-of album titled A Decade of Dreams which also included two new tracks.

The Ocean And Me