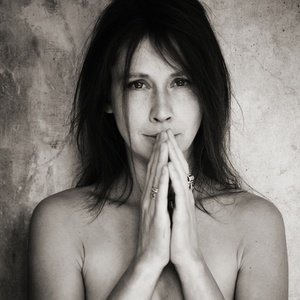 Lou Rhodes is the lead vocalist of chilled downtempo outfit Lamb who are famous for blending trip hop with jazz and elements of drum and bass. Rhodes' solo work however is more organic and rooted in folk music. Her 2006 debut solo album entitled "Beloved One" was shortlisted for the Mercury Music Prize. Rhodes' second album, Bloom, was released in October 2007. Lou Rhodes also runs Infinite Bloom records which releases her own work.

Her 2006 debut solo album entitled "Beloved One" was shortlisted for the Mercury Music Prize. Rhodes' second album, Bloom, was released in October 2007.

There is a certain strength found in stillness?a self-possessed beauty that conveys a wealth of emotion without an excess of movement. It's within this patient, colorful space that singer Lou Rhodes makes her presence felt. As one-half of Lamb, one of the most soulful, vibrant and musically elaborate bands of the last ten years, Rhodes composed intimate meditations on sensuality, longing, struggle, dedication, and the humbling power of true love. Partner Andrew Barlow complemented her vocals with rich topographies of sound, fusing organic instrumentation with off-time beats and hard quantized samples to create a push-pull aura of reservation and intricacy. But after their split following the release of 2004's Between Darkness and Wonder, Rhodes set off on a new path?one devoid of the frictions and frustrations she had grown all too accustomed to living with. Beloved One is her transcendental journey through the peaks and valleys of self-discovery, and from the first line of the opening song, represents an undiluted musical vision she can finally call her own. As enriching as this journey has been for Rhodes, it hasn't been without its share of hardship. Lamb's magic was always underscored by the tumultuous relationship between Rhodes and Barlow. They were?and still remain?the best of friends, though their polarized personalities led to a constant uphill battle in the studio. One side thrived off experimentation and complexity, the other off modesty and simplicity.

?I just got to a stage in my life where I didn't want to struggle anymore,? explains Rhodes. ?Lamb's music was incredibly complex. We spent so much time discussing and arguing on what we wanted to do. I didn't want anything in there that didn't need to be there.? Around the same time, however, another relationship was slowly deteriorating?Rhodes relationship with the father of her children. ?My whole life has been shaken up,? she says. ?It was quite telling that these two big relationships in my life broke down around the same time. My relationship with Andy lasted for ten years, and my relationship with my partner lasted for seven. ? Rhodes went from living in a four-bedroom house in London to essentially living out of a van with her two children. Eventually she came to rest at Ridge Farm, a small commune of 17th century buildings and modern facilities built on 13 acres of land in Surrey, England. Its pastoral setting and kaleidoscopic community have provided Rhodes with ?a richness of life that I couldn't even begin to describe.? ?I don't lead a rock ?n' roll lifestyle,? she laughs. ?I live out in the countryside with a vegetable garden and chickens. What matters to me is quite different than a lot of people out there making music. I guess I've shunned my hippie roots for far too long, and I'm getting back to them in a big way now. My mom was a folk singer, so I think I'm kind of carrying on the legacy in a way.? Recorded over the course of six weeks at Ridge Farm's historic studio space, Beloved One is the musical embodiment of Lou's metamorphosis. Drum ?n' bass rhythms are replaced by the spacious echoes of hand drum percussion, while Chinese violins and Tuvan guitars administer textures once provided by synthesizers and sequencers. Capturing the intimate nature of the sessions?clear vocals, warm acoustic guitars, luminous strings?was paramount for Rhodes and co-producer/percussionist Emre Ramazanoglu. The songs needed to ?be present? and ?speak what they needed.? Nothing was to be pushed too far. In fact, only one song, ?Why,? features a traditional drum kit. It also happens to be the only song credited to Rhodes, Barlow, Lamb guitarist Oddur Mar Runarsson and Lamb bassist Jon Thorne.

?It was written with Lamb,? Rhodes says of the ballad, ?but it just didn't feel appropriate for Lamb. It was very acoustic but very complete, and it was appropriate for that to be on my album.? There are a few other Lamb crossovers on Beloved One, but nothing that would draw an obvious creative parallel. Runarsson plays on six of the album's ten tracks, and Chi2 Strings?who appeared on Between Darkness And Wonder?return to arrange and perform on half the selections. Rhodes even got her step-father, Graham Burton, to contribute his guitar work on ?Each Moment New, ?Beloved One,? and ?In'lakesh.? But it's Rhodes own playing that glues each song together. Her rudimentary progressions and melodies are a perfect match to the stark vulnerability of confessionals like ?Save Me? and ?To Survive.? ?Did I let you down or just let you go? For as long as I live I swear I'll never know,? she whispers on ?To Survive,? echoing sentiments found on ?Treat Her Gently,? another of Beloved One's heart-stopping serenades. Likewise, songs like ?Tremble? and ?In'lakesh? are full of the childlike wonder and innocence that are such an integral part of Rhodes' songwriting approach. The emotional duality that makes Lamb such a powerful force, both live and on record, is unequivocally present. ?What you're getting with this project is one condensed aspect of the Lamb experience,? Rhodes informs. ?If you try to cover all eventualities you don't leave much room for magic. I'm certainly not saying there wasn't magic in Lamb, because there definitely was, but this is a very different project.? Beloved One may be Rhodes' most profound discovery. It strips her strongest attributes?honesty, imagination and love?to their purest form, and pushes them to the forefront of each song. There are clear pathways between the heart, the mouth and the ear. There is a new truth to her words. ?With Lamb, I felt like I had to be something larger than life,? confesses Rhodes. ?The whole set up, the performances, the dresses. It always felt like I was going through a metamorphosis from the ordinary, everyday Lou to the Lou that got onstage. With this project, the two things are the same. I'm just this woman with her kids and her life. There isn't a division between that, and I like that. It feels much truer, and that's where I want to be.?