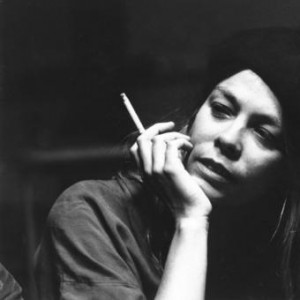 Rickie Lee Jones (born November 8, 1954) is a two-time Grammy Award-winning vocalist, musician, songwriter, and producer from the United States. Over the course of a three-decade career, Jones has recorded in various musical styles including R&B, blues, pop, soul, and jazz standards. Rickie Lee Jones is a singer songwriter whose style leans on jazz and pop/R&B timing and personification. Jones settled in LA at the age of nineteen, doing the classic waiting tables stuff until she landed a recording contract with Warners.

Her self-titled debut album in 1979 was a big success, as was the single, Chuck E.'s in Love, about her musician friend Chuck E. Weiss. At the 1980 Grammy Awards, she won a Grammy for Best New Artist, and also received four more nominations: for Record of the Year; Best Pop Vocal Performance, Female; Best Rock Vocal Performance, Female; and Song of the Year (for "Chuck E.'s in Love"). While none of her subsequent recordings achieved the same level of commercial success, Jones has continued releasing critically acclaimed albums that have explored a variety of sonic terrain from jazz standards to trip hop influenced works.

Jones' pursuit of jazz standards led to the recording of "The Moon Is Made of Gold" and "Autumn Leaves" for Rob Wasserman's album Duets in 1985. The latter track earned her another Grammy nomination. And in 1990, her duet with Dr. John, a cover of "Makin' Whoopee", earned the artist her second Grammy Award, this time in the category of Best Jazz Vocal Performance, Duo or Group.

At the time of recording her debut album, Jones was in a romantic relationship with Tom Waits; she is the girl draped over the car on the cover of his 1978 album Blue Valentine.

Early in her career, Jones was known for her drinking and substance abuse. She eventually tempered those demons, and came to terms with herself, and her own uncertain spirituality, and has maintained respect of her musical peers.

She's devoted to her talents, beyond music, one of which is raising her teenage daughter, and has even run her own political website and made music critiquing the Bush administration. She is involved in left-wing politics and community activism, partly through her web community, Furniture for the People (http://www.furnitureforthepeople.com/).

A greatest hits collection on Rhino called The Duchess of Coolsville was released in 2005.

In 2007 she signed to New West Records releasing The Sermon On Exposition Blvd, a record exploring lyrical territory inspired by Lee Cantelon's 1991 book The Words, which attempted to translate Christ's teachings into a more accessible contemporary format. Cantelon's friend, Guitarist Peter Atanasoff was instrumental in the creation of the eventual record.

The Other Side Of Desire

The Devil You Know

The Sermon on Exposition Boulevard

Duchess Of Coolsville: An Anthology CD3