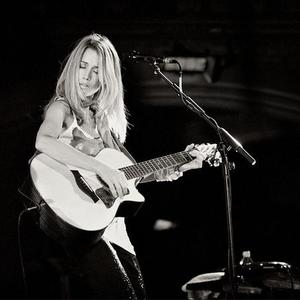 Heather Nova, born Heather Allison Frith, (Bermuda; July 6, 1967) is a singer-songwriter and poet. Heather Nova is the Bermudian Songwriter who grew up on a boat in the Caribbean and went on to sell over 2 million albums in her 15 year career to date. She has released seven albums and has opened for artists like Van Morrison and Neil Young as well as performed with artists like Sarah McLachlan. She has also had hit records with co-writes featuring artists like ATB (Renegade), and Eskobar (Someone New).Her brother is the Reggae singer Mishka.

Heather Nova is the Bermudian Songwriter who grew up on a boat in the Caribbean and went on to sell over 2 million albums in her 15 year career to date. She has released seven albums and has opened for artists like Van Morrison and Neil Young as well as performed with artists like Sarah McLachlan. She has also had hit records with co-writes featuring artists like ATB (Renegade), and Eskobar (Someone New).Her brother is the Reggae singer Mishka.

By the end of the 1980s, after leaving RISD, Heather moved briefly to New York City (where she unsuccessfully tried to interest some major labels in a demo including Columbia , who rejected her, only to sign her five years later ), before moving to London, England. She has British citizenship due to her Bermudan origin. In 1990, she released her first recording, an EP called 'Heather Frith' ? she had not yet changed her name by then. The name change came a year or so later after several gigs in the Netherlands, where, after finding out that the Dutch have trouble pronouncing "Frith," she chose a name that would be easily pronounceable in every European language, "Nova," her Canadian mother's maiden name.

The new name debuted in 1993 with her second EP 'Spirit in You' and her first full album, 'Glow Stars'. The success of the album led her to record and release her first live album, 'Blow', the same year, which she supported by a tour of Europe. A year later in 1994 she released what many consider to be her finest work to date, the emotional yet jagged album 'Oyster', for which she toured for almost two years. Another live album, 'Live from the Milky Way', was released in 1995, and after its release she toured for nearly three years straight, twice joining Sarah McLachlan and others on the North American Lilith Fair, which is a music festival with only female performers. Heather is also a frequent performer at European music festivals such as Roskilde.

In 1998, the long-awaited follow up to 'Oyster' was released. After the release of 'Siren', Heather took a break while various television show and film soundtracks licensed some of her songs and her record company (Sony Records/The WORK Group) released various singles from the album, which received only moderate play on America's MTV2, Europe's MTV and Canada's MuchMusic and on mainstream radio, although she was popular on college radio. Also during this time, she recorded a version of the often covered Billie Holiday song, 'Gloomy Sunday', for the German WWII drama Ein Lied von Liebe und Tod. In 2000, she released yet another live album, called 'Wonderlust'.

Over the years, Heather has written and recorded over a hundred songs, so that her albums are selected from work that has often already been performed live, rather than being conceived during rushed songwriting sessions. Half the songs on 'Siren' had been written during the 'Oyster' sessions and were frequently played live prior to being committed to a studio session, and most of the songs for 2001's 'South' were written between 1999 and 2000 while she was on hiatus from touring. With the release of 'South', she returned to the international spotlight with an appearance on the soundtrack of the John Cusack movie "Serendipity", a couple of music videos, and a collaboration with Swedish band Eskobar, for a song called "Someone New", also released as a video, which proved so popular that it was played primarily on America's MTV, not just MTV2 (which is normally reserved for less-popular songs). 'Storm', Heather's fifth studio album, was released in late 2003 on Big Cat Records, as was 'Redbird', released in 2005.

In 2002, she self-published 'the sorrowjoy', a 72-page book of her poetry and drawings. An album of the same name was released in March 2006, which featured Nova reading the poems from her book set to ambient music. The album has only been available for purchase at concerts beginning with the Intimate Evening tour, from the fan-run websites, HeatherNova.Net and HeatherNova.De, and from the official website, www.heathernova.com.

The album Storm was released in 2003. It was a more refined album, using Mercury Rev as Heather's backing band. The album was Top 5 in Germany and Top 10 across Europe. It was an album of dark ballads, marking a step away from the polished sound of South. It was also Heather's first release on her own record label, Saltwater Records. Despite being pregnant, she toured hard with a new line up and band, before returning home to Bermuda. (A live DVD was made of these concerts (live at the Union Chapel)

The Way It Feels