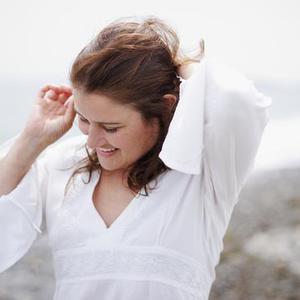 Paula Cole (born April 5, 1968 in Rockport, Massachusetts, USA) is an American singer and songwriter. Among her hits include "Where Have All the Cowboys Gone," "Me," "I Am So Ordinary," "I Believe In Love," and the theme to the WB's hit series "Dawson's Creek," "I Don't Want to Wait." ?An extraordinary songwriter with a gorgeous voice? ? Rolling Stone ?? a feisty poet with a soaring voice and a funky groove.? ? Entertainment Weekly

?An extraordinary songwriter with a gorgeous voice? ? Rolling Stone
?? a feisty poet with a soaring voice and a funky groove.? ? Entertainment Weekly
?Paula is an original voice both in what she is saying and how she is saying it.? ? Peter Gabriel.

Grammy winner and 7 time Grammy nominee Paula Cole has released six solo albums spanning an eighteen year career. She has sold approximately three million albums and has performed with icons in many genres of music from Peter Gabriel to Dolly Parton (and many more.) Cole's emotionally deep and thrilling performances are a trademark. Poetic and fiercely touching, intelligent writing makes Cole stand apart. Her compositions have been covered by Herbie Hancock, Annie Lennox, Katherine McPhee to name a few. From a small town in Massachusetts Paula Cole was raised in a musical family with whom she and her daughter remain close. Cole is a scholarship alumna from Berklee College of Music with a background in jazz, received her first record deal with a jazz label (which she declined), and has collaborated with many jazz artists. Paula teaches and gives clinics in a spirit of giving back to the circle of music. With a loving allegiance to her fans, she maintains loyal communication online and after her live shows. As the first woman in history to solely produce and receive the best Producer Grammy nomination for her work, ?This Fire?, Cole has broken boundaries with a searcher's spirit. From her top ten hits of the 1990's to her more recent critically acclaimed albums, Paula Cole continues to write, produce, record and perform heartfelt, meaningful, lasting music that defies categorization.