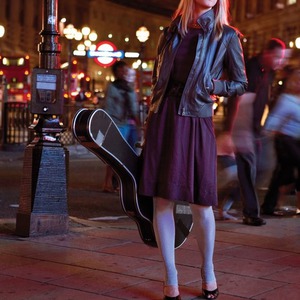 Tina Dico (born as Tina Dickow on October 14, 1977 in Aarhus, Denmark) is a singer and songwriter, inspired by artists such as Bob Dylan and Leonard Cohen. Tina Dico was born in Aabyh?j near Aarhus. At a very young age she was introduced to music by her father who owned a big hifi-system in their basement. After public school, she attended a music boarding school, and after that she went to high school. Music was still her passion and during her first years she performed with the cover band, Fester Kester.

Tina Dico was born in Aabyh?j near Aarhus. At a very young age she was introduced to music by her father who owned a big hifi-system in their basement.

After public school, she attended a music boarding school, and after that she went to high school. Music was still her passion and during her first years she performed with the cover band, Fester Kester.

In 1998, Tina Dico introduced the other members of the band Fester Kester to a song of her own, and their enthusiasm made them enter, and win, two talent contests the same year: "Talentspot" on Danish TV2, and "Vi har scenen, har I musikken?" (We have the stage, do you have the music?) in Aarhus.

The band "Tina Dickow and Sheriff" was formed in 1998 and later that year the single "Your Waste of Time" was released. It was picked as "Song of the Week" on Danish National Radio, P3, and lead to some degree of fame.

Hereafter several conversations with established record labels followed, but the way they intended to market her was not satisfying. Instead she got a loan from a bank, and started her very own record label, Finest Gramophone, in 2000.

The company's first release was Dico's Fuel in 2001. The critics were modest, but most recognized her potential as an artist. Also in 2001, Tina Dico teamed up with her current manager, Jonathan Morley on the SPOT-festival in Aarhus. She signed a four year contract with Morley and during the 2002 MIDEM-festival in Cannes, France she signed with the English publisher, Kojam Music.

In the beginning of 2002 Tina Dico moved to England in an attempt to escape from the cosy atmosphere in Denmark. The lack of challenge in Denmark drove her to seek her fortune and uncertainty in England.

Thanks to her contract with Jonathan Morley she had the opportunity to step into the English music community which lead to a collaboration with the Australian singer, Holly Valance on the song "Send My Best".

The album Notes was written during her stay in England and it captured the loneliness and fear of being all alone in London. Notes was recorded in two days and was released later same year. The critics were very positive this time.

Notes won a Steppeulv (the Danish music critics award) in the category "Composer of the year" and a Danish Music Award for "Songwriter of the year".

During her work with Holly Valance, Tina Dico met Sam Hardaker, who stood behind the English trip-hop-lounge duo, Zero 7. She was asked to collaborate with them and they recorded "Home" and "The Space Between" which are featured on the album When It Falls. A tour with more than 100 shows in Europe, USA and Asia followed after.

The EP Far with new versions of some of the tracks from Notes, one track from Fuel and a brand new song was released in 2004. The purpose of the EP was to follow up on the success from the Zero 7 tour.

In 2004 Tina Dico signed a multinational record deal with Sony UK, and the recordings to her international debut begun in late 2004.

In early 2005 Sony and BMG merged, and the deal was cancelled. The legal rights to the songs was handed over to Tina Dico, and the album was released in cooperation with the Danish company, A:Larm in June 2005. The album went straight to number one on the Danish album chart in front of prominent names such as U2 and Coldplay.

In January 2006 Tina Dico won the P3 Award and DKK 100,000 which is granted by Danish National Radio P3. Some of the motivations from the jury were: ?Courage, self esteem and talent is required if you want to be yourself and perform your own songs ? without overstyled fuss. The winner of the P3 Award certainly possesses these qualities.?

In March 2006 Tina Dico won the Danish Music Award in the category "Singer of the year".

"Side By Side - Duets Vol. 1" features original tracks and two cover tunes performed with friends Meiko, Susie Suh, Julianna Raye, Buddy, Tina Dico and Rick Garcia. (5 Bonus tracks available at iTunes) The EP is worth owning if only on the strength of the incredibly haunting and beautiful cover of George Harrison's "While My Guitar Gently Weeps."

Where Do You Go To Disappear

The Road To Gävle