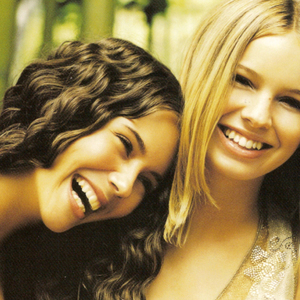 M2M was the name of a Norwegian pop music duo comprised of two young ladies - Marion Raven and Marit Larsen - who had Atlantic Records and Warner Music as their labels. The duo produced 2 albums, Shades of Purple and The Big Room, and a "Greatest Hits" release (after M2M disbanded, under decision of their record label) under the band name M2M, and a Norwegian Children's album under their respective names (informally "Hubba Bubba").

The girls had known each other since they were five, before forming the group in the mid-1990s. They debuted with their first single, "Don't Say You Love Me," in 1999. The song was featured on the soundtrack of Pok?mon: The First Movie - Mewtwo Strikes Back. It was also the lead single off their debut album, Shades of Purple, released in 2000. They later released four more singles off the album: "Mirror Mirror,""The Day You Went Away,""Pretty Boy," and "Everything You Do." The album debuted at number 1 in Norway and several Asian countries and top 40 in most others. It also reached the number 1 position on the "Billboard Heatseakers" chart for developing artists. The album went on to sell over 2 million copies worldwide.

In 2002, the girls returned with a more mature, less pop-oriented sound, in their second album, The Big Room. In just two years, their voices had changed, especially Marion's. Their first single off the album would be "Everything," followed by,"What You Do About Me." There would not be a third single.

In 2002, while on tour with Jewel, M2M was dropped by Atlantic Records, citing lack of record sales, even though the album did do well in Norway, Asia, and Australia. Marion was later offered a new contract and released her first album, Here I Am, in June, 2005. Marit attended the University of Oslo, and released her debut album in 2006.