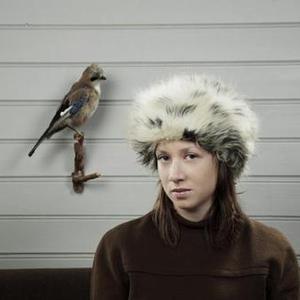 With Hanne Hukkelberg you never know what you get. Just that it's experimental, cinematic and melodic. Hukkelberg's music has always been about personal sound. This has given her great artistic freedom to move effortlessly between genres, and her three previous albums are defined by utterly distinct soundscapes: debut Little Things (2005) was eccentric and adventurous, second offering Rykestrasse 68 (2007) warm and lyrical, and third album Blood From A Stone (2009) explored a huge, romantic indie rock canvas inspired by the likes of Sonic Youth...

The otherworldly take on pop, jazz and art rock has given Hukkelberg two nominations for the Norwegian Grammy, mulitple tours and a wide audience internationally and a tour with Wilco in 2010. This was also the year she travelled to New York to write new material.
The result is Featherbrain ? Hukkelberg's fourth album ? the last part of the circle, to be released world wide February 2012.

Combining the noisy guitars and heavy rhythms of Blood From A Stone, the stripped-down, lyrical lightness from Rykestrasse 68, and the weired and quirky sound picture from Little Things, Featherbrain creates a kind of antique pop music, at the same time brittle and soft, powerful and fragile. Hukkelberg explains:?This album feels like the missing link. Now these four album are one?.

Featherbrain is a risky album. Both dissonant and lyrical, it is music for headphones and notebooks. Its intimate, eccentric sounds demand your intimacy and your eccentricity, but the effort is rewarded: a personal and honest sonic world opens up, in fact, so sincere Hukkelberg had to toughen up to record it. Listen carefully!

Blood From A Stone