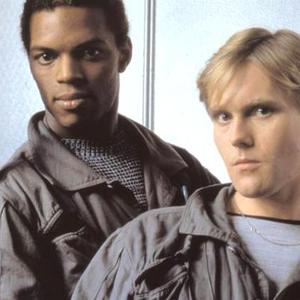 The band General Public formed after the 1983 break-up of The Beat (aka The English Beat). Ex-Beat vocalists Dave Wakeling and Ranking Roger joined up with keyboardist Mickey Billingham (Dexys Midnight Runners), bassist Horace Panter (The Specials) and drummer Stoker (Dexys Midnight Runners/The Bureau) to form the band. Guitarist Mick Jones of The Clash was also originally announced as a band member.

General Public signed to I.R.S. Records and released All the Rage (1984). However, by the time the album was released, Jones was no longer a member of General Public, although he did play guitar on the majority of the album's tracks. Kevin White (who also played on the album) was now the group's official guitarist and sixth member.

In Britain, General Public had a minor hit with the eponymous track called "General Public", which reached # 60. The band fared better in North America, where their second single "Tenderness" was a top 40 hit in the US and Canada, reaching #27 on the U.S. charts, thanks in part to heavy play from MTV and Los Angeles-based modern rock station KROQ. (Ironically, The Beat never had any top 40 hits in the UK.) [Chart info cited from: The Billboard Book of Top 40 Hits, Billboard Books (2004).]

For the follow-up album, White and Stoker were replaced by brothers Gianni Minardi and Mario Minardi on guitar and drums, respectively. Unfortunately, despite featuring a track from the soundtrack to Weird Science, Hand to Mouth (1986) was significantly less successful than the debut album, and the band soon split up. They both front two versions of the band, with Roger & Everett Moreton ( as The Beat ) in the UK & Dave in America ( as The English Beat ).

The duo (now the only members of General Public) stayed together to release the album Rub It Better in 1995, recorded with the aid of producer Jerry Harrison. But sales were dismal, and Roger was tired of the grind of touring, so they soon broke up again.