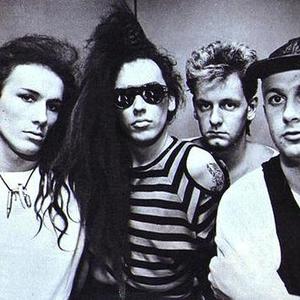 Dead or Alive is an influential new wave band from Liverpool that rose to popularity during the 1980s and gained a cult following in Japan during that time. They are best known for the hit singles "You Spin Me Round (Like A Record)" and "Brand New Lover". Before Pete Burns founded Dead Or Alive, he was involved with a Liverpool based band named Nightmares In Wax (no relation to Nightmares on Wax). The band centred around alternative music and released their only notable record, Black Leather in 1979 or 1980.

Before Pete Burns founded Dead Or Alive, he was involved with a Liverpool based band named Nightmares In Wax (no relation to Nightmares on Wax). The band centred around alternative music and released their only notable record, Black Leather in 1979 or 1980.

Upon founding the band, Burns hired friend Steve Coy as drummer. Over the next four years, Burns would hire and fire dozens of musicians including alternative British punk rocker Wayne Hussey. Eventually, Burns settled on a four piece made up of himself, Steve Coy, Mike Percy and Tim Lever.

Pete Burns (1981-Present) vocalist of the band and songwriter. His voice was once described as "a light which fills the darkness". Burns did not play any instruments but mimed with an electric guitar in some music videos.

Steve Coy (1982-Present) Drummer, birth name Stephen McCoy. The youngest member of the band, Coy wrote music for the band but did not delve into the world of lyrics. As of 1996, Coy took over the job of producing Dead Or Alive's videos starting with the David Bowie cover "Rebel Rebel" from the album Nukleopatra.

Timothy Lever (1983-1990) Keyboards, Saxophone, Guitars. The prematurely bald musician from Liverpool appeared older than he actually was. He and guitarist Mike Percy were responsible for most of the actual songwriting for the band.

Jason Alburey (1996-Present) Replaced Percy and Lever in the musical department, Alburey was instrumental in the formation of Dead Or Alive's ever modernising sound. Alburey appears in the 2006 video for "You Spin Me Round (Like a Record)" despite having nothing to do with the song itself.

Wayne Hussey (1980-1983) An early member of the band who wrote the song Misty Circles and who left to join The Sisters of Mercy before going on to form The Mission, a popular British New Wave group.

Dead or Alive (sometimes called DOA for short, but not to be confused with punk band D.O.A.), was founded in 1980 by Pete Burns, one of the most visible genderfuck performers and gay icons of the decade. Steve Coy, the longest standing member of the band, plays drums and percussion as well as sharing songwriting responsibilities. Former members of the band include Tim Lever (keyboards/sax) and Mike Percy (bass).

The debut album, Sophisticated Boom Boom, featured their first Top 40 single: a remake of KC and The Sunshine Band's 1975 hit "That's The Way (I Like It)".

In 1985, they released the album Youthquake, produced by Stock, Aitken and Waterman and steeped in the sound of hi-nrg which was then at the peak of its popularity in the gay clubs. The single "You Spin Me Round (Like A Record)" went to number one on the UK charts after having lingered outside the Top 40 for over two months after release, and twenty years later is still a dance-floor favourite. Several other tracks from the album, including "Lover Come Back to Me" and "In Too Deep", also became dance hits.

In 1986, Dead Or Alive released their third album, Mad, Bad, and Dangerous to Know., which included the dancefloor smash "Brand New Lover". Two years later, they parted ways with Stock, Aitken and Waterman, and released the self-produced Nude, which featured the hit "Turn Around And Count 2 Ten"; a single that spent seventeen weeks at number one on the Japanese charts.

1990 saw the release of Fan the Flame Part. 1, and 1995 the album Nukleopatra, which featured covers of "Rebel Rebel" and "Picture This". Initially released in Japan only, Nukleopatra, unlike its predecessor, was also released in Australia, Singapore, South Africa, France and the US, and each and every release sported different art covers, tracklistings and song versions; many releases of Nukleopatra also included one or more remixes of "You Spin Me Round (Like a Record)".

In 2000, Dead Or Alive released Fragile, a compilation of remixes with several new tracks and covers of "Even Better Than the Real Thing" and "I Promised Myself", and another remix album, Unbreakable: The Fragile Remixes, in 2001. This was followed by a greatest hits album called Evolution: The Hits, released in 2003 which featured yet another remix of "You Spin Me Round (Like a Record)"; both of them enjoyed, for the first time since Nude, a UK release, with "You Spin Me Round (Like a Record)" re-entering the Top 40.

In 2004, Pete Burns enjoyed solo success with the Boys track "Jack And Jill Party". Although only released through the Pet Shop Boys website, the track reached number 75 in the single chart and was an underground club hit.

In January 2006, Pete Burns appeared on British TV in Celebrity Big Brother. Following a live performance of "You Spin Me Round (Like a Record)" during the show, Dead Or Alive then went on to re-release the single the same month accompanied with an updated music video featuring original band members. Again the song charted in the UK, this time hitting number five.

Where Are They Now?

After their height of success during the 1980s, the original band parted in 1990 when songwriters and musicians Tim Lever and Mike Percy left to form careers as mixers and recordists. The pair currently own and operate Steelworks Studios in Sheffield, UK [1]. As recordists, Lever and Percy have had more chart success than they ever did with Dead Or Alive, mixing number one tracks from bands like S Club 7, Blue and Robbie Williams.

Pete Burns and Steve Coy joined keyboard player Jason Alburey in 1996 and have continued to record and play venues every since. Though they have never replicated the success of 1985, Dead Or Alive still command a large international following.

Rip It Up! Live

In 1987, the band embarked on their world tour which consisted of dates in Europe, Japan and the USA. The dates in Japan (Tokyo and Osaka) were filmed and released on VHS. For the tour, the band remixed several of their songs including 1984's "You Spin Me Round (Like a Record)" and "My Heart Goes Bang".

It was widely believed that the concert was entirely mimed, though this was not entirely true. Whereas Burns mimed to a vocal track, the band (Coy, Lever and Percy) played the backing track live while two dancers mimed the guitar solos.

The tour was re-released in 2003 on the Evolution DVD. It was also released as a Laserdisc and as a CD (though the CD version was not a live recording).

Contrary to popular belief, the 1984 song "You Spin Me Round (Like a Record)" was not the band's biggest success. While the song topped the UK singles chart for two weeks, the 1989 track "Turn Around And Count 2 Ten" topped the Japanese charts for a massive seventeen weeks.

Due to Pete Burns' slight resemblance to the more well-known gender-bending pop star Boy George during the mid-1980s, many outside of the UK assumed Dead or Alive was an answer of sorts to Culture Club. However as stated in the above article, Dead or Alive was formed in 1980 - a year before the formation of Culture Club.

The song "You Spin Me Round (Like A Record)" was used in the infamous meatspin shock site.

Fan The Flame Pt. 2 (The Resurrection)