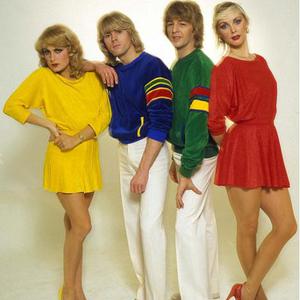 On the 4th April 1981, history was to be made as four relatively unknown singers Mike Nolan, Cheryl Baker, Bobby G and Jay Aston, collectively known as Bucks Fizz, represented the UK at that years Eurovision Song Contest. Bucks Fizz performed the timeless classic tune "Making Your Mind Up", together with the now famous skirt ripping dance routine. This was one of the most up tempo songs of the evening and with only two rounds of voting to go, it was a three way tie between Germany the UK and Switzerland.

Switzerland were yet to vote and gave eight points to the UK, but Nil Points to Germany. Despite the final jury giving Germany maximum points, Bucks Fizz won the contest.
This victory was to set them up for a career that was to be as successful as any British Eurovision winner before, or since. They went on to be one of the most popular bands of the 80s with a string of hit singles and albums.
"Making Your Mind Up" was a number one for the group in nine different countries and recieved gold disc status in four countries.. This was promptly followed by a further two top twenty hits "Piece Of The Action" and "One Of Those Nights" and a self titled album which went Gold in the UK and Platinum in Australia.
After winning the contest, the group built on their success with other awards and accolades. In November 1981, they won Best Song Award at the Yamaha Song Contest (oriental eurovision) in Tokyo with the song "Another Night".
Their next single released in November 1981,"The Land Of Make Believe" went Gold before Christmas of that year and went on to become one of their most popular songs, reaching Number One in three countries and winning the Amplex Golden Reel Award for One Million copies sold.
In 1982, the success for Bucks Fizz continued and in April of that year the groups fourth single, "My Camera Never Lies" went straight to Number One in the UK. This was followed in May by the groups 2nd studio album "Are You Ready" which went Gold immediatley. This also produced another hit "Now Those Days Are Gone" which reached Number Eight in the UK charts.
1984 was to be an eventful year. Bucks Fizz toured the UK on a 7 week sell out tour.
1983 saw the release of "If You Cant Stand The Heat" which reached number 10 in the UK charts, this was followed by "Run For Your Life" both singles were featured on the groups 3rd studio album "Hand Cut" which charted at number 15 in the UK.
Later that year saw the release of "When We Were Young" a slightly different sound with Jay on lead vocal. "London Town" followed and then a Greatest Hits album which finished theyear on a high.

Three more singles were released "Talking In Your Sleep", Golden Days" and" I Hear Talk" which was a surprise club hit in America. Fate was to deal the group a devastating blow that year. Whilst on tour in December there was a horrific Coach crash which resulted in the serious injury of Mike Nolan.
As Mike was on the road to recovery Bucks Fizz recieved yet another blow as Jay Aston decided to depart the group after a scandalous affair with the bands Manager which made front page of all the tabloids.
Auditions were held in London for a Jay Aston replacemenet. About 800 girls turned up to audition and finally Shelley Preston was recruited to replace Jay.
1986 saw Bucks Fizz back on top of the charts with a new look, a new record deal with Polydor and a new single called "New Beginning" The single reached number 8 in the UK charts and was a great success.
A further two singles were also released this year "Love The One Your With" and Keep Each Other Warm" together with waht would be their 5th studio album "Writing On The Wall".
The single "Heart Of Stone" was released in 1988 this would later be covered by Cher a couple of years later.
Shelley Preston decided to leave the group in 1990 to pursue solo projects and the group continued as a trio.

Are You Ready (The Definitive Edition) CD2

Are You Ready (The Definitive Edition) CD1

The Best Of The Lost Masters...And More!

Up Until Now CD2

Up Until Now CD1