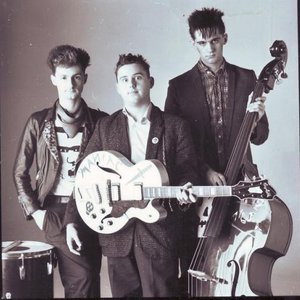 The Meteors were started in 1980 by P. Paul Fenech (guitar and vocals), Nigel Lewis (upright bass), and Mark Robertson (drums). Fenech and Lewis had played in rockabilly bands before, but left their former band, Raw Deal, in order to experiment with a new sound that mixed horror and science fiction lyrics with a punk rock-rockabilly crossover. This sound would later be called psychobilly.

The Meteors played their first show during Rockabilly Night at The Sparrow Hawk in north London, but after being heckled due to their punk fashion, decided to begin playing shows beyond just rockabilly clubs. They developed a loyal following known as "the Crazies," who invented their own dance style called "going mental," a cross between dancing and moshing. This would later be renamed "wrecking," and is still a staple of the psychobilly scene to this day. Coupled with Fenech's ritual of spitting blood during performances, many clubs believed they were dangerous and refused to book them. The band began playing at punk rock clubs alongside other UK punk bands such as the Anti-Nowhere League and the UK Subs. However, unlike punk bands, the Meteors would insist that their shows be "a politics and religion free zone" in order to focus on having a good time instead of allowing disputes between fans to break out. Because of their example, there are nearly no political themes in psychobilly today.

Due to their cult following, the Meteors made a film in late 1980 with comedian Keith Allen called Meteor Madness. It was released as a double feature with two-tone ska film Dance Craze in March 1981. The movie featured four songs, which made it onto the band's first vinyl single. In August 1981, the band were signed to Island Records and recorded their first full-length, In Heaven.

The Meteors have gone through numerous line-up changes since, with Fenech being the only original member today. The current line-up includes Mark Burnett on bass and Wolfgang Hordemann on drums. They have 17 official albums, countless singles, and numerous reissues and compilation appearances. They continue to record using their own recording studio, In Heaven, and have extensively toured Japan, America, Europe, and Scandinavia.

P. Paul Fenech has also released many solo albums and plays in a rockabilly side-project, the Legendary Raw Deal, named after his first band. Nigel Lewis and Mark Robertson went on to first play together in the Escalators, a psychedelic rock band, then the Tallboys, a rockabilly band best known for recording the song "Take a Walk" for the Return of the Living Dead soundtrack.

There's also a dutch band called The Meteors. One of the most wayward Dutch rock groups in the period between the late '70s and early '80s. The Meteors release three records which feature a futuristic sort of 'art' rock which is influenced by Roxy Music and David Bowie. The band formed in 1977 and disbanded in 1982.
Source: www.hollandrocks.com

The Kings Of Psychobilly CD3

The Kings Of Psychobilly CD4

The Kings Of Psychobilly CD5

The Kings Of Psychobilly CD1

The Kings Of Psychobilly CD2

Hymns For The Hellbound (Limited Edition)

Hymns For The Hellbound