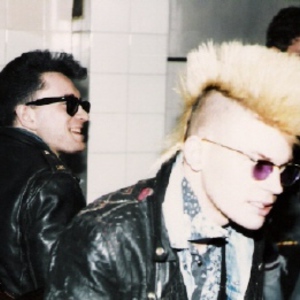 NOTE: this tag is not incorrect. Basically all of the albums except I Wanna See You Bleed have the name WITHOUT an exclamation mark, and even the band's official Facebook page is called "Demented Are Go Official", NOT "Demented Are Go! Official". Demented Are Go were originally formed in 1982 in Cardiff, Wales and were one of the first Psychobilly bands to take the genre in an even harder, more aggressive and Punked-up style in the wake of originating bands such as The Meteors, Guana Batz and King Kurt.

Demented Are Go were originally formed in 1982 in Cardiff, Wales and were one of the first Psychobilly bands to take the genre in an even harder, more aggressive and Punked-up style in the wake of originating bands such as The Meteors, Guana Batz and King Kurt. Since then, through their vastly influential and innovative early albums, shocking antics and the powerful character of vocalist/band leader Sparky, the band have risen to become one of the indisputable leaders of the Psychobilly scene.

Their first release were two songs on the 1984 compilation LP Hell Bent On Rockin' on Nervous Records, and though initially some in the Psychobilly scene perceived them as little more than a bad joke, their two first albums In Sickness & In Health (1986) and Kicked Out Of Hell (1988) placed them at the forefront of Psychobilly and were highly influential for the second wave of Psychobilly. The band continued with the mini-LP The Day The Earth Spat Blood in 1989 on Link Records, more known as a Punk-label. Certainly partially because of this Demented Are Go seem to be the most accepted and popular Psychobilly of the "old guard" among Punks.

Orgasmic Nightmare (1991), Tangenital Madness (1993) and Hellucifernation (1999) saw the band grow increasingly harder and rougher, with Hellucifernation in particular being probably their heaviest, most aggressive album to date, still retaining the "trademark" Demented Are Go Sound. Hellucifernation also includes their rendition of the classic Funnel Of Love, which has become something of a live staple and enduring classic for the band. Their most recent full-length album is Hellbilly Storm, released in 2005 on the German label People Like You Records. In addition to these, the band has released several live albums, singles and a few EP's.

Although the band has at times split up (or rumours of a split-up have circulated), although the line-up has fluctuated a lot and Sparky's antics have from time to time put spokes in the wheels, the band has remained an active live performed throughout their career and continue to tour heavily.

Welcome Back To Insanity Hall

Who Put Grandma Under the Stairs ?

Kicked Out of Hell