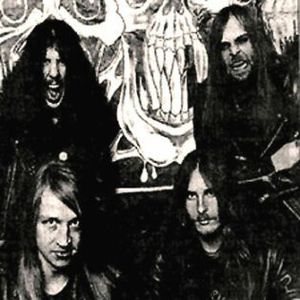 Disciples of Power (often referred to simply as the initials "D.O.P." by fans) is a thrash-influenced death metal band from Edmonton, Alberta, Canada. The band was formed in 1987 by Warthorn vocalist/guitarist Hart Bachmier and drummer Dean Relf. The original lineup also featured lead guitarist Maurice Williams and bassist Chris Chapman. Their complex compositions and quite technical approach to thrash metal earned them a large following of fans within Canada's underground metal scene quite quickly.

In 1989 they were signed to the Fringe Product label and released their first album, Power Trap. The video for Crisis, a bleak track about the current state of our environment, got them a lot of early exposure on Canada's MuchMusic network and MTV.

The band has seen a few lineup changes over the years. Chapman left the band quite early on to pursue other interests and Williams moved to Vancouver to join Process. Wes Sontag, of Section VIII, joined D.O.P. as the new lead guitarist and, along with founders Bachmier and Relf, Sontag has since remained a constant member of the band. The group did not have the same luck early on with bass players, however. Colin Post, also from Section VIII, played bass on Ominous Prophecy as well as Invincible Enemy, the band's second and third releases, he left shortly after. The task of finding a bass player, especially someone with the skill to perform their frenzied and often complex style of music, was made more difficult by problems dealing with their soon-to-be-defunct label, fringe. A few bass players came and went during the latter half of the 1990s, during which time the band only released one album: the slightly experimental sounding Mechanikill was released by Mindt Gash Records, a record label created by the band when the problems at Fringe left a sour taste in their mouths for record companies. Stability was finally restored to the line-up when bassist Andy Smith, formerly of Deceit, joined D.O.P. in 2000.

The band officially split up in November 2003 and the original website for the band was taken down in 2005 but have recently started an official MySpace page and blog at www.myspace.com/disciplesofpower. A recent post announced that they had secured a license to act as a vendor on Apple's iTunes online music store and, in the original spirit that created Mindt Gash, they are currently looking to help independent bands sell their recordings on iTunes without having to deal with a record label. All five D.O.P. albums are also now available in digital format on the iTunes store, the record label for all of their digital releases has been Van Richter Records.

Since the band has been on hiatus, members have actively worked in other projects including the newly reformed Section VIII (Sontag, Relf), Warmarch (Relf) and Dead Mans Train (Bachmier, Relf). A compilation album was apparently in the works in late 2008 but no concrete details were ever announced.

In Dust We Trust