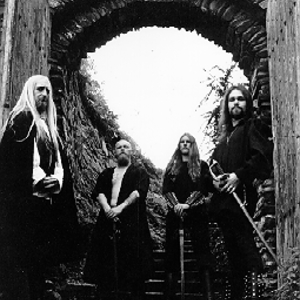 (1) Hades is a Norwegian band, founded in 1992 by Erstwhile Immortal guitarist Jorn Inge Tunsberg along with ex-Dark drummer Remi, adopted the addition of their home country to their name after their 1993 demo 'Alone Walkyng' appeared following protests from the American Hades. This opening session saw the founding duo joined by Janto Garmanslund on bass and vocals with Nagel on guitar. 'Alone Walkyng' saw a commercial issue through the Vantgarde subsidiary Wounded Love Records. The band's debut album, issued in December of 1994 and finding Stig usurping Nagel as second guitarist, had the group offering familiar Norwegian Black Metal based around Viking and pagan themes.

With the release of the 1997 album 'Dawn Of The Dying Sun' the record company took the opportunity to reacquaint the public with the 1994 debut, releasing both albums together as a double vinyl album set limited to 1'000 copies. To back up this release the band put in extensive touring, which saw a burst of dates across not only Europe but also Mexico and the USA. The transition from HADES to HADES ALMIGHTY was marked in September of 1998 as the band entered the Prolog Studio in Dortmund, Germany to record the exceptionally dark and ominous album 'Millenium Nocturne', released under license from Nuclear Blast by Hammerheart Records. A Benelux tour allied with MAYHEM and PRIMORDIAL preceded a further campaign across Europe in league with Immortal and Benediction.

(2) Hades is a thrash metal band formed in New Jersey in 1978. The original members were still in high school when the band was formed and it wasn't until the '80s that Hades made it to a wider audeince, touring heavily and opening for bands such Megadeth, Slayer, Anthrax and Nuclear Assault.

After having songs appear on Metal Blade's Metal Massacre VI and Megaforce's Born To Metalize compilation albums, Hades released their debut album, Resisting Success in 1987 and the follow-up, If At First You Don't Succeed in 1989.
After a tour of Europe in 1989 they broke up, with members moving on to other bands.

In 2008, the CruzDelSur label released the Hades live DVD, filmed at a show in Boston in December 1988, where the band opened for Manowar and Nuclear Assault. Also included was the 'Behind The Metal' documentary, filmed during the recording of the 2000 - The Downside album featuring interviews with the bandmembers as well as old video clips, TV appearances and live footage.

(3) Hades is a death metal band from China

(4) Hades was a Norwegian prog rock group, hailing from the county of Vestfold. Their music has been described as a blend of Cream and Jethro Tull, with a distinct flute that makes up the melody lines together with the occasional strong bluesy guitar licks. Although they only released one vinyl/Mini LP (LP Colours COMLP 007, 1992, originaly recorded live in 1974) on Colours records in 1992 they sound remarkingly experienced on this recording. They sang in norwegian. The original vinyl is only in a 1000 ex., and must be quite rare nowadays.

(5) Hades is a hardcore band from the UK. Influenced by Holy Terror. http://www.myspace.com/hadesdurham

(6) Hades is a stage name of a member of a prominent Hip Hop group from Poland - HiFi Banda. His debut album Nowe dobro to z?o is to be released in October 2011 for Prosto label.

The Pulse Of Decay

The Dawn Of The Dying Sun