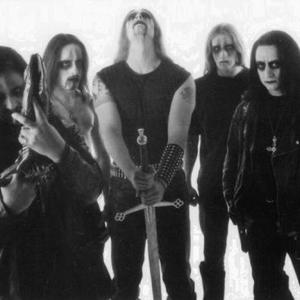 Hecate Enthroned are a Melodic Black Metal band from North Wales. The band formed in 1993 under the name Daemonum by singer Jon and guitarist Nigel. After a few practices and recording a demo, vocalist Jon left the band after taking up an offer to join Cradle of Filth as their bassist. However during which time Jon was also heavily involved in the production of Dusk... and her embrace. A year or so later, Jon rejoined and they changed their name to Hecate Enthroned, this time playing a more melodic black metal style.

In 1995 they recorded their demo "Ode for a Haunted Wood", which got the attention of the British label Blackend Records. Blackend had it re-mastered under the title Under Promethean Shores (Unscriptured Waters) in 1996.

Leaving little time to pass, the band went back to the studio in 1998 to record Dark Requiems...and Unsilent Massacre. Slower and darker in approach, this was considered to be HE's darkest release, fusing grinding guitars and melodic, creepy keyboard lines with lyrics that touched more on the romantic and macabre side while still retaining their dark Satanic roots.

In 1999 the band unanimously decided to fire vocalist Jon, due to quite a few problems between him and the rest of the band. They ended up getting vocalist Dean (from the band EWOC) to record the vocal lines for their follow-up album, Kings Of Chaos. This saw a dramatic change in musical focus, leaning heavily more towards death metal, but not forsaking its original black metal sound. Some have even considered this to be their most "original" sound yet, claiming it to be a combination of Deicide and Emperor.

2001 saw the release of a small EP of original songs (with a cover of "Buried Alive" by fellow Englishmen Venom), entitled Miasma, that served as an appetite whetter for their next full-length album, 2004's Redimus (Latin for "Reborn"), their second album under their new death metallish sound. After the album was released, vocalist Dean decided to leave the band, as well as keyboardist Daz, who were then replaced by new singer Dagon and keybordist Pete.

In 2005 Dean returned to Hecate Enthroned. This return was followed by several sold-out gigs in the Czech Republic and numerous gigs around the UK. 2006 saw HE embark on a UK headline tour playing in London, Southampton, Nottingham, Bradford and Wolverhampton, as well as applying the finishing touches to a brand new studio album.

Embrace of the Godless Aeon

The Slaughter Of Innocence, A Requiem For The Mighty (Reissued)

The Slaughter Of Innocence, A Requiem For The Mighty CD1