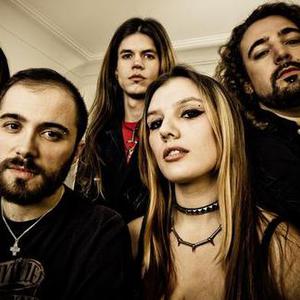 Anthropia is a French speed epic progressive metal band. They've released their 1st album ("The Ereyn Chronicles Part I - The Journey of Beginnings") in 2006. Anthopia mentions nymphs, dwarves, dragons, witches, and magic spells to rock fans and it immediately smirks and conjures an image of the satirical band Spinal Tap? or something equally or far more geeky and unhip. What if we told you that French prog metal band Anthropia has written an epic composition that is inhabited by blacksmith dwarves...

Anthopia mentions nymphs, dwarves, dragons, witches, and magic spells to rock fans and it immediately smirks and conjures an image of the satirical band Spinal Tap? or something equally or far more geeky and unhip.

What if we told you that French prog metal band Anthropia has written an epic composition that is inhabited by blacksmith dwarves, mocking sprites, mercenary barbarians, a talking horse, a cunning succubus, and seaweed-intolerant dragons (among other creatures) in a cross-dimensional fictional plotline? Still chuckling? Well, stop, because the mastermind of Anthropia, Hugues Lefebvre (nickname Hugo), is reviving the rock fantasy genre and ups the ante with the explosive, multi-layered first installment of a planned trilogy -- The Ereyn Chronicles: Part I: The Journey of Beginnings, based on the writings of Quentin Borderie.

"I was not a huge fan of fantasy, but I was so truly captivated by Quentin's story that I wrote music around it." Hugo says.

Hugo realized that the only way to capture the many nuances of the story was to write and record three separate records to coincide with the exciting episodes that sprang from Borderie's fertile mind. ?With an in-depth story like this, we felt the best way to present the main events of the story was to separate them into three major parts,? Hugo says. ?Basically, each song represents a chapter of Quentin's novel.?

Simply put, Anthropia's classical-metal-prog hybrid enraptures the listener in a world of sound, vision, and imagination. In classic prog-rock long-suite fashion, The Journey of Beginnings opens with ?Welcome to Ereyn? -- a visual-aural overture surveying the entire Ereyn epic. ?I really am more of a classical guy than a metal guy,? Hugo admits. ?I'm proud of the record: I don't like filler tracks,? Hugo says. ?I prefer a record that is 30 minutes with only five songs, than a 60 minute-CD with filler. Hopefully, I've put together a record that listeners will sit an listen to uninterrupted.?

Hugo's classical guitar playing, a skill he learned through intense study at ??cole de musique d'Antibes? (a music academy in Antibes, France), is just as important as any character in this fantasy-drama. ?I studied classical guitar and theory from age six to nearly 18,? Hugo says. ?It wasn't until I was in high school that I was introduced to bands like Iron Maiden and eventually started listening to Dream Theater and Symphony X. It had a profound effect on me and my music.?

This marriage of classical, prog, and metal is evident in the headbangin'-dreamlike ?Through the Sleeping Seaweed?, the infectious ?Where the Secrets Lie? (which Hugo describes as ?emotional? and ?a soft song that holds the listener's attention?), the soaring recurring melodic themes of ?Forgotten?, and the alternately melancholy and rhapsodic closer ?The Desert of Jewels? (in which Hugo interprets Antonio Lauro's Venezuelan Waltz #3 for classical guitar). Hugo truly uses all the means at his disposal for this dynamic, near-perfect prog-metal-pop track. ?It was a hard song to compose ?The Desert of Jewels',? Hugo says. ?I just wanted it to be the perfect fit for the final track of the album. It's a long song, but I think listeners won't get bored hearing it."

Aside from a few guest appearances and the steady hands (and blazingly fast double-kick action) of drummer Damien Rainaud, Anthropia is in reality a one-man band led by Hugo. As a solo act, the 24-year-old composer stretches the limits of normal creativity. (That's fitting. The title of the band references, in part, mankind's awareness of its divine origins -- its place in the grand scheme -- and the beauty and complexity of the universe.) ?We used to be a trio, but the other members went on to become computer electronics engineers,? Hugo says. ?I guess I wanted to live the musician's life and just decided to do everything alone under the moniker of Anthropia. While I'd occasionally like the advice of other musicians, I also don't have to worry about defending my ideas or working hard to protect a decision I've made.?

For the Ereyn Chronicles Part I, Hugo spent a year writing his compositions in his home studio on the French Riviera and a month to record them in Harkam Studio near Monaco. ?I program the drum machine so that I can record quickly the guitar, bass, vocals, arrangement to have a demo of the music,? Hugo says. ?When I record the songs for real, I track the guitars first, because it is the main instrument of Anthropia, and the songs may change a bit from the demo version. (In this way, I am free to change riffs and structure.) Afterwards we record the drums and bass.?

Hugo is hard at work on a second record ? a record that is independent, not a continuation, of the Ereyn Chronicles series. ?I might do an unrelated record in between each Ereyn Chronicles release,? Hugo says. ?I have been listening to quite a bit of the classic prog band like Yes and Genesis lately as well as the Finnish metal band Nightwish. It is turning out to be a mixture of metal and prog.?

Sounds great, but isn't taking a break from the Ereyn Chronicles a bit risky, Hugo? ?I hope not,? Hugo says with a laugh. ?I hope it causes some kind of dependency on the storyline, so that people are waiting for the second and even third parts.?


ABOUT THE STORYLINE?
The fictional universe of Ereyn, ruled by queen Lunne, has sunk into chaos and disarray. The old ways have been forgotten, and the road to redemption ? an ancient wisdom that has been buried for ages ? is lost. (A situation exacerbated by minions of the dark counterworld Empyr.) With aid, the main character, the young Amryl, must search for the all-knowing oracle in order to save his misguided people. However, he soon becomes a victim of a near-fatal shipwreck and is separated from his search party. His boat is in ruins and so is his life: Amryl suffers from amnesia and can't remember who he is. Suddenly, an expansive search for truth and knowledge transforms into a mission of self-discovery. "The hero of the story is not a mighty warrior and doesn't wield a mighty sword," explains Hugo. "He's young and na?ve. He doesn't know a lot of things about the world, but by the end of [the story] that all changes."

Part I ends as our soon-to-be hero thinks his journey and existence are over. What's in store for him? As if we're watching an elaborate Saturday-morning-matinee cliffhanger, we'll have to wait to find out...

The Ereyn Chronicles. Part. 1 - The Journey Of Beginnings