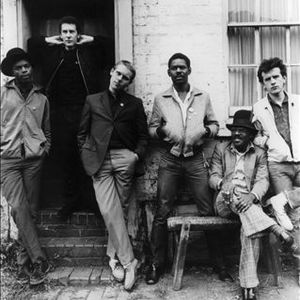 The Beat, known in the United States as The English Beat (and the British Beat in Australia and New Zealand) in order to avoid confusion with Paul Collins' band of the same name, was a popular Two Tone ska and pop music group. Formed in the English city of Birmingham in 1978, The Beat disbanded in 1983, but has reformed in the early 2000s with some of the original line-up. One of the more popular and enduring groups of a short-lived trend...

One of the more popular and enduring groups of a short-lived trend, The Beat released three albums: "I Just Can't Stop It" (1980), "Wha'ppen" (1981) and "Special Beat Service" (1982), and a string of excellent singles including "Mirror in the Bathroom", the politically-charged "Stand Down Margaret" (which refers to controversial British PM Margaret Thatcher), "Save It For Later" and "I Confess".

Although the group's main fan-base was in the UK, they were also popular in Australia thanks to regular exposure on the government-owned rock radio station Triple J and the nationally-broadcast TV pop show Countdown. They had a sizeable following in the U.S., and a strong presence on that country's college radio.

After the break-up of The Beat, Dave Wakeling (guitar, lead vocals) and Ranking Roger (vocals) went on to form General Public, while Andy Cox (guitar) and David Steele (bass guitar) formed Fine Young Cannibals with vocalist Roland Gift.
Members of the band often collaborated on stage with The Specials and performed together on tracks such as "Free Nelson Mandela". In the early 1990s, Roger joined members of The Specials to form the new band The Special Beat, which released two live albums.

Ranking Roger's son, Ranking Junior, has followed in his father's footsteps. In 2005, he appeared on The Ordinary Boys' single "Boys Will Be Boys". In 2003, The Beat's original line-up, minus Cox and Steele but with the addition of Junior, played a sold-out one-off gig at the Royal Festival Hall. As of 2005, The Beat has reformed, counting Roger, Blockhead and Morton of the original line-up, with Ranking Junior also on vocals. The band is said to have the blessing of Cox, Steele and Saxa (of Desmond Dekker fame).

The Beat's lead singer Dave Wakeling also continues to tour as The English Beat, as he has done for the last three decades, with an amazing all-star ska backing band playing the hits of The English Beat, General Public, and his new songs.

You Just Can't Beat It: The Best Of The Beat CD2

You Just Can't Beat It: The Best Of The Beat CD1

The Beat Goes On