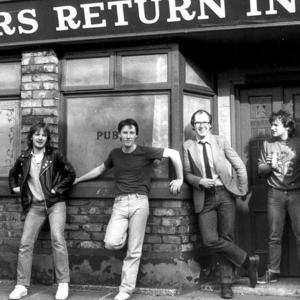 Any Trouble are a British rock band, originating from Crewe, England, best known for the early 1980s recordings. The band reformed in 2007. Any Trouble was an underappreciated bright spot on Stiff Records, a label which had no shortage of talented artists. Bandleader Clive Gregson's appearance, hardened love songs, and vocal style may have led to comparisons to Elvis Costello, but they were no second-rate rip-off -- each of their four albums revealed a songwriter of unique talent and a more-than-capable band to execute the songs.

Any Trouble was an underappreciated bright spot on Stiff Records, a label which had no shortage of talented artists. Bandleader Clive Gregson's appearance, hardened love songs, and vocal style may have led to comparisons to Elvis Costello, but they were no second-rate rip-off -- each of their four albums revealed a songwriter of unique talent and a more-than-capable band to execute the songs.

Manchester-native Gregson formed the original band in 1975 while attending teaching school in Crewe, taking the group's name from a misquote from the Mel Brooks film Blazing Saddles. After a brief moment as a folky trio with singer Tom Jackson, by 1976 Any Trouble changed to a four-piece rock group, speeding up their repertoire in response to the punk movement -- by this point the lineup was Gregson (vocals/guitar), Chris Parks (guitar), Phil Barnes (bass), and Mel Harley (drums). They built a strong following playing the pub circuit and released their own single, catching the attention of Radio One's John Peel, who quickly took the band and played the song on his show. This exposure started a small-scale bidding war from several labels. By 1980, the group signed with Stiff Records.

John Wood , a renowned producer (Nick Drake, John Martyn, Richard Thompson) who had recently produced Squeeze, was hired to produce Any Trouble's first album. Where Are All the Nice Girls? which had all the makings of a new wave classic, was met with some rave reviews but failed to rack up the big sales that were expected of it. After the record failed commercially, Stiff suggested that Gregson drop the band and redefine himself as a solo artist a la Elvis Costello - Buddy Gregson. Gregson declined, deciding instead to replace the band's drummer Harley, with the more capable Martin Hughes . They began work on the follow-up immediately.

Wheels in Motion (1981), while certainly more accomplished, lacked the spark of the first album and the record simply didn't catch on in the U.K. Any Trouble took a stab at Stateside success with a small promotional tour. Halfway through the tour, the band heard by word-of-mouth that they had been dropped by Stiff and were left stranded in America. Eventually they found their way back, but the stress of the situation broke up the band temporarily -- for about 18 months.

Martin Hughes departed and was replaced by Andy Ebsworth and Steve Gurl was added on keyboards. Chris Parks left shortly thereafter. Essentially a new band, the four-piece recorded Any Trouble in 1983. Again, the same story -- should've been a hit, somehow overlooked. Gregson, knowing the band couldn't last much longer, talked EMI into letting them do a double album. As a parting shot, Gregson and company stretched out for Wrong End of the Race , a sprawling album that allowed them to show their diversity and influences over 25 tracks of new originals, remakes of earlier Any Trouble songs, and a few covers. In America, the album was distilled down to a single record. "Baby Now That I Found You" saw some airplay on MTV; the reviews were good, but the band's cult status didn't change.

In 1984, the band played their last gig and called it quits. Gregson went on to a distinguished, though still underappreciated, career both as a solo artist and as a collaborator with Christine Collister.

In 2007, following the re-release of several Any Trouble albums on CD, Clive Gregson, Chris Parks and Martin Hughes, plus Mark Griffiths on bass, re-formed to record a new album which was released on the re-born Stiff Records label on 10 September 2007. The album was titled Life in Reverse and featured thirteen new Gregson songs. It was produced by John Wood, and had unique artwork by the Stiff Records designer Tobbe Stuhre. The band played a reunion gig at the Jazz Cafe in London to celebrate the release.

Wrong End Of The Race

Live At The Venue (Vinyl)

Where Are All The Nice Girls?