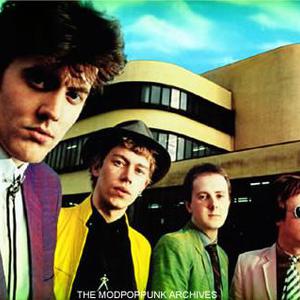 The JAGS was formed in 1978 by the Yorkshire-based songwriting team of Nick Watkinson (vocals) and John Alder (guitar), with Steve Prudence (bass) and Alex Baird (drums). In July of 1978, they signed to Island Records and released a promising four-track EP. Their debut LP in 1980 "Evening Standards" , included the memorable, though highly derivative, "Back of My Hand," which had reached the U.K. Top 40 the previous fall. The follow-up, "Woman's World" barely scraped its way on to the charts.

Though "Evening Standards" featured a really solid set of punchy power pop songs, critics focussed instead on Watkinson's Costello-like delivery, writing the band off as merely mimics. As steam ran out of the power pop craze, the band attempted to change their sound a bit. 1981's "No Tie Like the Present" featured a slightly new direction, but it was generally overlooked.
By 1982, the Jags had disbanded for good, though "Back of My Hand" had a revival of sorts in the '90s, appearing on several compilations.