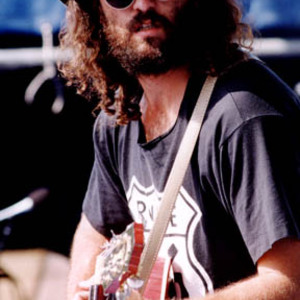 James McMurtry (born March 18, 1962 in Fort Worth, Texas) is a Texas rock/Texas Country singer, songwriter, guitarist, bandleader and occasional actor (Daisy Miller, Lonesome Dove). He performs as James McMurtry And The Heartless Bastards with veteran bandmates and rhythm section Darren Hess and Ronnie Johnson (not to be confused with the Cincinnati, OH, band Heartless Bastards). The son of acclaimed author Larry McMurtry (Lonesome Dove, Terms of Endearment), James grew up on a steady diet of Johnny Cash and Roy Acuff records.

The son of acclaimed author Larry McMurtry (Lonesome Dove, Terms of Endearment), James grew up on a steady diet of Johnny Cash and Roy Acuff records. His first album, Too Long in the Wasteland (released in 1989), was produced by John Mellencamp and marked the beginning of a series of acclaimed projects for Columbia and Sugar Hill. In 1996, McMurtry received a Grammy nomination for his Longform Music Video of Where'd You Hide The Body. 1997's It Had To Happen received the American Indie Award for Best Americana Album.

In 2004, McMurtry released the universally-lauded Live in Aught-Three on Compadre Records. 2005's Childish Things garnered some of the highest critical praise of McMurtry's career and spent six weeks at No. 1 on the Americana Music Radio Chart in 2005 and 2006. In September 2006, Childish Things and "We Can't Make It Here" won the Americana Music Awards for Album and Song of the Year, respectively. McMurtry received more Americana Music Award nominations for 2008's Just Us Kids. This album marked his highest Billboard 200 chart position in more than 19 years.

In 2009, Live in Europe was released, capturing The McMurtry Band's first European tour and extraordinary live set. Along with seasoned band members Ronnie Johnson, Daren Hess, and Tim Holt, the disc features special guests Ian McLagan and Jon Dee Graham. Also, for the first time ever, video of the James McMurtry Band's live performance is available on the included DVD.

The poignant lyrics of his immense catalog still ring true today. In 2011, "We Can't Make It Here" was cited among 'The Nation's' "Best Protest Songs Ever." Bob Lefsetz writes, "'We Can't Make It Here' has stood the test of time because of its unmitigated truth."

Never one to rest on his laurels, James McMurtry continues to tour constantly, and consistently puts on a "must-see" powerhouse performance. 'The Washington Post' noted McMurtry's live prowess: "Much attention is paid to James McMurtry's lyrics, and rightfully so: He creates a novel's worth of emotion and experience in four minutes of blisteringly stark couplets. What gets overlooked, however, is that he's an accomplished rock guitar player. At a sold-out Birchmere, the Austin-based artist was joined by drummer Daren Hess and bassist Ronnie Johnson in a set that demonstrated the raw power of wince-inducing imagery propelled by electric guitar. It was serious stuff, imparted by a singularly serious band."

JAMES McMURTRY LIVE IN EUROPE CD WITH BONUS DVD DOCUMENTS FIRST EURO TOUR WITH GUESTS IAN MCLAGAN AND JON DEE GRAHAM
On October 13, 2009, Lightning Rod Records released Live in Europe, a document of McMurtry's first European tour, on which, along with long-time band members Ronnie Johnson, Daren Hess, and Tim Holt, he was joined by keyboardist Ian McLagan and fellow Texas songwriting legend Jon Dee Graham. The set is available as a CD with a bonus DVD, or as a deluxe vinyl LP package with a CD and DVD insert. In early 2009, James McMurtry and his trio traveled overseas to play their first European tour. The guys played for enthusiastic crowds in Germany, Great Britain, Ireland, The Netherlands, Scotland and Belgium. Joining the band on keyboards for the tour was the legendary Ian McLagan (who also played on McMurtry's latest studio album, Just Us Kids). The best recordings from the Amsterdam, The Netherlands and Geislingen, Germany concerts were combined to create Live in Europe. The album includes a bonus DVD featuring performances from the Amsterdam show. This marks the first time fans will be able to purchase video footage of McMurtry live in concert. The deluxe vinyl version includes inserted copies of the CD and DVD. Fellow Austin-based songwriter Jon Dee Graham opened the shows and joins the band on a version of his tune "Laredo" on the bonus DVD.

JAMES McMURTRY ALBUMS REISSUED: 'CHILDISH THINGS' & 'LIVE IN AUGHT-THREE'
On February 1, 2011, two of James McMurtry's most popular albums, Childish Things and Live in Aught-Three were reissued by Lightning Rod Records. Live in Aught-Three has been remastered since its original 2004 release and will be available on vinyl for the first time. The deluxe double LP also includes a copy of the album on CD.

The Horses and the Hounds

Best Of The Sugar Hill Years

Live In Aught-Three (With The Heartless Bastards)

Saint Mary Of The Woods

Walk Between The Raindrops

It Had To Happen