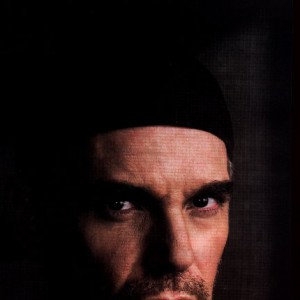 Billy Bob Thornton (born William Robert Thornton on August 4, 1955) is an Academy Award-winning American screenwriter, actor, as well as occasional director, playwright and singer. He came to fame in the mid 1990s, after writing, directing, and starring in the film Sling Blade, and has since established a career as a Hollywood leading actor, having appeared in several successful films, including 2003's Bad Santa. Thornton, who has been described in media reports as "Hollywood's go-to alpha male",[1] is also known for his former marriage to actress Angelina Jolie.

Early life
Thornton was born in Arkansas to Billy Ray Thornton, a high school history teacher and basketball coach, and Virginia R. Faulkner, a psychic. Thornton has three younger brothers, Jimmy Don, born in 1958 and now deceased, Jim Bean, and John David, born in 1969. Thornton lived in both Alpine, Arkansas and Malvern, Arkansas during his childhood, and also spent time with his grandfather, Otis Thornton, a forest ranger, in a small shack in the woods. He attended Henderson State University in Arkadelphia, Arkansas, where he studied psychology but dropped out after two semesters. Thornton is the cousin of noted professional wrestlers Dory Funk, Jr. and Terry Funk, which Terry Funk notes in his autobiography Terry Funk: More Than Hardcore.
In the late 1980s, Thornton settled in Los Angeles to pursue his career as an actor alongside future writing partner Tom Epperson. Thornton initially had a difficult time succeeding as an actor, and worked in telemarketing, off-shore wind farming and fast food management while auditioning for acting jobs. He also played drums and sang with South African rock legend Piet Botha's band Jack Hammer. While Thornton worked as a waiter for an industry event, he served film director Billy Wilder and struck up a conversation with Wilder, who advised Thornton to consider a career as a screenwriter.

Career
Thornton first came to semi-prominence as a cast member on the CBS sitcom Hearts Afire with John Ritter and Markie Post. His role as the villain in 1992's One False Move brought him to the attention of critics. He also had small roles in the early 1990s films Indecent Proposal, On Deadly Ground, Bound By Honor, Grey Knight, and Tombstone.
Thornton put Wilder's advice to good use, and went on to write, direct and star in the independent film Sling Blade, which was released in 1996. The film, an expansion of a short film titled Some Folks Call It a Sling Blade, told the story of Karl Childers, a mentally retarded man. Sling Blade garnered international acclaim. Thornton's screenplay earned him an Academy Award for Best Adapted Screenplay, a Writers Guild of America Award, and an Edgar Award, while his performance received Oscar and Screen Actors Guild nominations for Best Actor. Thornton adapted the book All the Pretty Horses into a 2000 film with the same name, starring Matt Damon and Pen?lope Cruz. Also in 2000 he and Tom Epperson wrote The Gift which starred Cate Blanchett, Hilary Swank, Keanu Reeves, Katie Holmes and Giovanni Ribisi.
During the late 1990s, Thornton, who has had a life-long love for music, began a career as a singer-songwriter. He released a roots rock album entitled Private Radio in 2001, and two more albums, The Edge of the World (2003) and Hobo (2005). Thornton was the singer of a blues rock band named Tres Hombres. Guitarist Billy Gibbons referred to the band as "The best little cover band in Texas", and Thornton bears a tattoo with the band's name on it.[2] He also performed the Warren Zevon song The Wind on the tribute album Enjoy Every Sandwich: Songs of Warren Zevon. Thornton also recorded a cover of the Johnny Cash classic Ring of Fire for the Oxford American magazine's Southern Music CD in 2001. As of September 2006, Thornton is working on another album.[3]
Thornton's screen persona has been described by the press as that of a "tattooed, hirsute man's man".[1] He appeared in several major film roles following Sling Blade 's success, including 1998's Armageddon and A Simple Plan, 2001's Monster's Ball and 2004's The Alamo, in which he played Davy Crockett. He played a malicious mall Santa Claus in 2003's Bad Santa, a black comedy that performed well at the box office and established Thornton as a leading comic actor. Thornton has stated that following Bad Santa's success, audiences "like to watch [him] play that kind of guy"[1] and "they [casting directors] call me up when they need an asshole. It's kinda that simple... you know how narrow the imagination in this business can be".[4] His most recent role is in the comic film School for Scoundrels, which was released on September 29, 2006. In the film, he plays a self-help doctor; the role was written specifically for Thornton.[1] His upcoming roles include The Astronaut Farmer, a drama scheduled for a February 23, 2007 release; another comedy, Mr. Woodcock, in which Thornton will play a sadistic gym teacher; and the drama Peace Like A River, which is scheduled to begin filming in early 2007. Thornton has also expressed an interest in directing another film, possibly a period piece about cave explorer Floyd Collins,[5] based on the book Trapped! The Story of Floyd Collins by Robert K. Murray and Roger Brucker.
Thornton received a star on the Hollywood Walk of Fame on October 7, 2004.

Personal life
Thornton has stated on several occasions that he has obsessive-compulsive disorder; he and rock singer Warren Zevon became close friends after sharing their common experiences with the disorder.[6] He is known for various idiosyncratic behaviors, well-documented in interviews with the actor. Among these is a phobia of antique furniture, something shared by the Dwight Yoakam character in the Thornton-penned Sling Blade. That trait was also added to Thornton's character in the 2001 film Bandits. Additionally, he has stated that he has a fear of certain types of silverware,[7] a trait which was included for his character in 2001's Monster's Ball, in which his character requests a plastic spoon each time he consumes his daily bowl of chocolate ice cream.
Thornton lives in Los Angeles. He has been married five times, perhaps most notably to actress Angelina Jolie. The pair were known for their eccentric behavior, including reports that they wore vials of each others' blood around their necks; he later clarified this to be that the two of them wore small lockets that contained a drop of blood from each of them inside.[1][8] Thornton and Jolie adopted a child from Cambodia renamed Maddox. Jolie's divorce petition named the child as being both hers and Thornton's offspring and requested the Court grant her custody and Thornton reasonable parenting time.[9] He is the father of four other children: Amanda Spence with his first wife, Melissa Gatlin; William Langston and Harry James with his fourth wife, Pietra Cherniak; and Bella, with Connie Angland, who is Thornton's current girlfriend. Thornton has also stated that he will likely not marry again; he has specified that he believes that marriage "doesn't work" for him.[1]
On September 11, 2003, Thornton had received word that his ex-Hearts Afire star, John Ritter had passed away, while filming the last movie Bad Santa, which was dedicated to him. He along with Markie Post attended Ritter's funeral four days after his co-star's death.

The Edge Of The World