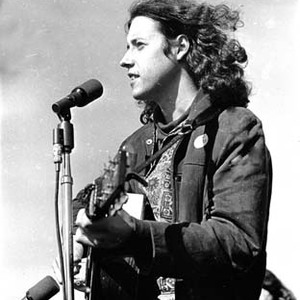 Arlo Guthrie (born 10th July 1947, Brooklyn, New York ) is an American folk singer who is the son of folk singer and composer Woody Guthrie and his wife Marjorie Mazia Guthrie, a one-time professional dancer with the Martha Graham Company and founder of The Committee to Combat Huntington's Disease. He graduated from the Stockbridge School of Massachusetts in 1965, and briefly attended Rocky Mountain College.

His most famous work is Alice's Restaurant, a talking blues song that lasts eighteen minutes and twenty seconds (in its original recorded version; Guthrie has been known to spin the story out to forty-five minutes in concert). The song, a bitingly satirical protest against the Vietnam War draft, is based on a true incident. In the song, Guthrie was called up for a draft examination, and rejected as unfit for military service as a result of a criminal record consisting in its entirety of a single arrest, court appearance, fine and clean-up order for littering. In reality, Guthrie, though a carrier of the genetically inherited disease Huntington's chorea, was classified as fit (1A); however, his draft-lottery number did not come up.

This Land Is Your Land (With Woody Guthrie)