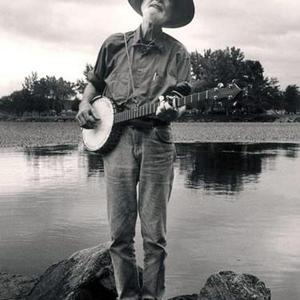 Pete Seeger (born May 3, 1919) is an American folk singer, political activist and author, and a key figure in the mid-20th century American folk music revival. He is particularly loved as the author (or co-author) of the songs Where Have All The Flowers Gone, If I Had a Hammer, and Turn, Turn, Turn. One of his brothers is Mike Seeger; Peggy Seeger is his half-sister. As a member of the Weavers, Pete Seeger had a string of hits, including a 1949 recording of Leadbelly's "Goodnight Irene" that topped the charts for 13 weeks in 1950.

As a member of the Weavers, Pete Seeger had a string of hits, including a 1949 recording of Leadbelly's "Goodnight Irene" that topped the charts for 13 weeks in 1950. He was formerly a member of the Communist Party of the United States of America and was a major contributor to folk and protest music in the 1950s and the 1960s.

Perhaps best known today as the author or co-author of the songs Where Have All The Flowers Gone, If I Had a Hammer, and Turn, Turn, Turn, songs that have been recorded by many artists both in and outside the folk revival movement and which are still sung all over the world. flowers was a hit recording for The Kingston Trio (1962), Marlene Dietrich, who recorded it in English, German and French (1962), and Johnny Rivers (1965). "If I Had a Hammer" was a hit for Peter, Paul & Mary (1962) and Trini Lopez (1963), while The Byrds popularized "Turn, Turn, Turn" in the mid-1960s.

Seeger dropped out of Harvard (where he had been studying journalism) in 1939, and he took a job in Washington, D.C. at the Archive of American Folk Song in the Library of Congress. In that capacity, he met and was influenced by many important musicians such as Woody Guthrie and Leadbelly. He met Woody at a "Grapes of Wrath" migrant workers concert on March 3, 1940 and the two thereafter began a musical collaboration.

In 1948, Seeger wrote the first version of his now-classic How to Play the Five-String Banjo, a book that many banjo players credit with starting them off on the instrument. He went on to invent the Long Neck or Seeger banjo. This instrument is three frets longer than a typical banjo, and slightly longer than a bass guitar at 25 Frets, and is tuned a minor third lower than the normal 5-string banjo.

As a self-described "split tenor" (between an alto and a tenor), he was a founding member of the folk groups the Almanac Singers with Woody Guthrie and the Weavers with Lee Hays, Ronnie Gilbert and Fred Hellerman. The Weavers had major hits in the early 1950s, before being blacklisted in the McCarthy Era.

On August 18, 1955, Pete was subpoenaed to testify before the House Un-American Activities Committee (HUAC) where he refused to name personal and political associations stating it would violate his First Amendment rights... "I am not going to answer any questions as to my association, my philosophical or religious beliefs or my political beliefs, or how I voted in any election, or any of these private affairs. I think these are very improper questions for any American to be asked, especially under such compulsion as this." Seeger's refusal to testify led to a March 26, 1957 indictment for contempt of Congress; for some years, he had to keep the federal government apprised of where he was going any time he left the Southern District of New York. He was convicted in a jury trial in March 1961, and sentenced to a year in jail, but in May 1962 an appeals court ruled the indictment to be flawed and overturned his conviction.

Seeger started a solo career in 1958, and is known for songs such as "Where Have All the Flowers Gone?," "If I Had a Hammer" (co-written with Lee Hays), "Turn, Turn, Turn," adapted from the Book of Ecclesiastes, and "We Shall Overcome" (based on a spiritual and later became the unofficial anthem for the civil rights movement). Seeger became influential in the 1960s folk revival centered in Greenwich Village. He helped found Broadside Magazine and Sing Out!. He was strongly associated with Moses Asch and Folkways Records. To describe the new crop of folk singers, many of whom were politically minded in their songs, he coined the phrase "Woody's children", alluding to his former bandmate Woody Guthrie, who by this time had become a legendary figure. He has often sung and is associated with the song "Joe Hill".

An early advocate of Bob Dylan, Seeger was supposedly incensed over the distorted electric sound Dylan brought into the 1965 Newport Folk Festival, especially with the inability to clearly hear the lyrics. There are many conflicting versions of exactly what ensued, some claiming that he actually tried to disconnect the equipment. He is often cited as one of the main opponents to Dylan at Newport 1965, but claimed in 2005:

"There are reports of me being anti-him going electric at the '65 Newport Folk festival, but that's wrong. I was the MC that night. He was singing 'Maggie's Farm' and you couldn't understand a word because the mic was distorting his voice. I ran to the mixing desk and said, 'Fix the sound, it's terrible!' The guy said 'No, that's how they want it.' And I did say that if I had an axe I'd cut the cable! But I wanted to hear the words. I didn't mind him going electric.

Seeger achieved some notoriety in 1967 and 1968 for his song "Waist Deep in the Big Muddy", about a captain?a "big fool"?who drowned while leading a platoon on maneuvers in Louisiana during World War II. Seeger performed the song on the Smothers Brothers Comedy Hour after some arguments with CBS about whether the song's lyrics were objectionable. Although the song was cut from the Smothers Brothers show in September 1967, Seeger returned in January 1968 and sang the entire song. It was clearly an allegory about the U.S. under the leadership of Lyndon Johnson which was in over its head in the Vietnam War.

Another slight against Lyndon Johnson can be heard in his singing of Len Chandler's seemingly juvenile song, "Beans in My Ears" from his 1966 album Dangerous Songs!? in which he accuses "Mrs. Jay's little son Alby" (Alby Jay is meant to sound like LBJ) of having beans in his ears, or of not listening to the people.

Pete Seeger still performs occasionally in public, and for a number of years has appeared at the National Storytelling Festival in Jonesborough Tennessee to tell stories, these days mostly children's stories such as Abiyoyo. He performed at MerleFest April 27-30, 2006 in Wilkesboro, NC.

On March 16, 2007, the 88-year old Pete Seeger performed with his siblings Mike Seeger and Peggy Seeger, and other Seeger family members at the Library of Congress in Washington, D.C., where he had been employed as a folk song archivist 67 years earlier.

Seeger lives in the hamlet of Dutchess Junction in the Town of Fishkill, NY and remains very politically active in the Hudson Valley Region of New York, especially in the near-by City of Beacon, NY. He and Toshi purchased their land in 1949, and lived there first in a trailer, then in a log cabin they built themselves, and eventually in a larger house. Seeger joined the Community Church (a church practicing Unitarian Universalism), is considered a famous Unitarian Universalist, and often performs at functions for the Unitarian Universalist Association.

Seeger has been the recipient of many awards and recognitions throughout his career, including:
A Grammy Lifetime Achievement Award (1993)
The National Medal of Arts from the National Endowment for the Arts (1994)
Kennedy Center Lifetime Achievement Honor (1994)
The Harvard Arts Medal (1996)
Induction into the Rock and Roll Hall of Fame (1996)
Grammy Award for Best Traditional Folk Album of 1996 for his record "Pete" (1997)

Stories and Songs for Little Children