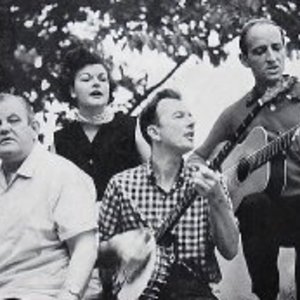 The Weavers, an American folk group, began in 1947 and consisted of Ronnie Gilbert, Pete Seeger, Lee Hays, Fred Hellerman, and often Erik Darling. The name came from an 1892 drama of the same name by Gerhart Hauptmann. They inspired the commercial "folk boom" that followed them in the 1950s and 1960s, including such acts as The Kingston Trio and Peter, Paul and Mary. The group's first big hit was in 1949 with Leadbelly's Goodnight Irene, backed with the 1941 Israeli song Tzena, Tzena, Tzena.

The group's first big hit was in 1949 with Leadbelly's Goodnight Irene, backed with the 1941 Israeli song Tzena, Tzena, Tzena. In keeping with the commercial taste of the time, these and other early Weavers releases had violins and orchestration added behind the group's own guitars and folk instruments.

The Weavers' records and concerts helped popularize many of the songs now considered standards in the folk repertoire, including "On Top of Old Smoky" (with guest vocalist Terry Gilkyson), "Follow the Drinking Gourd," "Kisses Sweeter than Wine," "The Wreck of the John B (aka "Sloop John B")," "Rock Island Line," "The Midnight Special," "Pay Me My Money Down," and "Darling Corey." The Weavers encouraged sing-alongs in their concerts, and Seeger would sometimes shout out the lyrics in advance of each line.

The Weavers eventually came under political pressure because of their history of singing protest songs and folk songs favoring labor unions, as well as for the leftist political beliefs of the individuals in the group. They avoided recording the more controversial songs in their repertoire, and refrained from performing at controversial venues and events. The leftwing press derided them as having sold out their beliefs in exchange for popular success. Despite their caution, however, they were placed under FBI surveillance and blacklisted by parts of the entertainment industry during the McCarthy era, from 1950. Right-wing and anti-Communist groups protested at their performances and harassed promoters. As a result of the blacklisting, the Weavers lost radio airplay and the group's popularity diminished rapidly, reducing them to playing smaller venues for occasionally hostile audiences. Decca terminated their recording contract and deleted their songs from its catalog in 1953.

Pete Seeger continued his solo career after the group disbanded in 1952, although Seeger continued to suffer from the effects of blacklisting. In December 1955, the group reunited to play a sold-out concert at Carnegie Hall. The concert was a huge success. A recording of the concert was issued by the independent Vanguard Records, and this led to their signing by that record label (by the mid-1950s, folk music was surging in popularity and McCarthyism was fading).

The Weavers were hired to provide the vocals for a TV commercial, the product being a brand of cigarettes. Seeger, opposed to the dangers of tobacco and discouraged by the group's apparent selling out to commercial interests, spent his last year with the Weavers honoring his commitments, but feeling like a prisoner. He left the group on April 1, 1958.

Seeger recommended Erik Darling of The Tarriers as his replacement. Darling remained with the group until June 1962, leaving to pursue a solo career and to eventually form the folk-jazz trio The Rooftop Singers. Frank Hamilton, who replaced Darling, stayed with the group nine months, giving his notice just before the Weavers celebrated its 15th anniversary with two nights of concerts at Carnegie Hall in March 1963. Folksinger Bernie Krause, later a pioneer in bringing the Moog synthesizer to popular music, was the last performer to occupy "the Seeger chair." The group disbanded in 1964, but Gilbert, Hellerman and Hays occasionally reunited with either Seeger or Darling into 1980.

Lee Hays, ill and confined to a wheelchair, wistfully approached the original Weavers for one last get-together. Hays's informal picnic prompted a professional reunion, and a triumphant return to Carnegie Hall. A documentary film, The Weavers: Wasn't That a Time!, chronicled the history of the group, and the events leading up to the reunion; it was released in 1982, after Hays's death.

Lee Hays died in 1981; a book biography, "Lonesome Traveler" by Doris Willens, was published in 1988. Ronnie Gilbert has toured America as a soloist. Fred Hellerman is a recording engineer and producer. Pete Seeger is the elder statesman of folk music; he doesn't travel as often as formerly. The group was inducted into the Vocal Group Hall of Fame in 2001.

In February 2006 The Weavers received the Lifetime Achievement Award given out annually at the Grammy awards show. Represented by members Ronnie Gilbert and Fred Hellerman, they struck a chord with the crowd as their struggles with political witch hunts during the 1950s were recounted. "If you can exist, and stay the course -- not a course of blind obstinacy and faulty conception -- but one of decency and good sense, you can outlast your enemies with your honor and integrity intact," said Hellerman.

Wasn't That A Time?

The Best Of The Weavers (Vinyl)