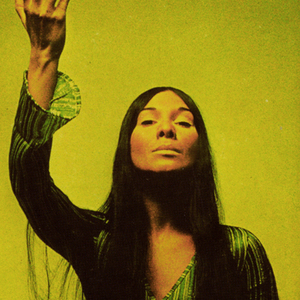 Buffy Sainte-Marie (born 20 February 1941) is an Academy Award-winning Canadian First Nations musician, composer, visual artist, educator and social activist. She was born on the Piapot Cree reserve in the Qu'Appelle valley, Saskatchewan. She was later adopted and grew up in Maine and Massachusetts. She went on to earn a Ph.D. in Fine Arts from the University of Massachusetts and also holds degrees in both Oriental Philosophy and teaching.

She was born on the Piapot Cree reserve in the Qu'Appelle valley, Saskatchewan. She was later adopted and grew up in Maine and Massachusetts. She went on to earn a Ph.D. in Fine Arts from the University of Massachusetts and also holds degrees in both Oriental Philosophy and teaching.

By 1962, having graduated, Buffy began to tour alone, developing her craft and performing in various concert halls, folk festivals and Native reservations across the U.S, Canada and abroad. She spent a considerable amount of time in the coffeehouses of downtown Toronto's old Yorkville district, and New York City's Greenwich Village as part of the early to mid-1960s folk scene, often alongside other emerging Canadian contemporaries Leonard Cohen, Joni Mitchell and Neil Young.

She quickly earned a reputation as a gifted songwriter, and many of her earliest songs, such as Until It's Time For You To Go, were turned into hits by other artists including Barbra Streisand, Elvis Presley, Sonny and Cher, Chet Atkins, Roberta Flack, Janis Joplin and Neil Diamond, among others.

Her debut album, It's My Way, was released on Vanguard Records in 1964 and she was subsequently named Billboard Magazine's Best New Artist. This album also contained the critically acclaimed protest song Universal Soldier that later became a hit for Donovan.

In 1967 she released the album Fire and Fleet and Candlelight which contained probably the definitive interpretation of the traditional song Lyke Wake Dirge, and the hit Now that the Buffalo's Gone, a protest over broken treaties with First nations people. Sainte-Marie's other well-known songs as a performer include Mister Can't You See (a Top 40 U.S. hit in 1972) and He's An Indian Cowboy In The Rodeo.

In the late sixties, she used a Buchla synthesizer to record the album Illuminations, but it didn't get much notice. "People were more in love with the Pocahontas-with-a-guitar image," she said in a 1998 interview.

She married musician Jack Nitzsche in 1969, and regularly appeared on the children's TV series Sesame Street over a five year period from 1976 - 1981, with her son Dakota Starblanket Wolfchild.

The song Up Where We Belong (which she co-wrote with Will Jennings and Jack Nitzsche) as performed by Joe Cocker and Jennifer Warnes for the film An Officer and A Gentleman, received the Academy Award for Best Song in 1982.

In 1992, she appeared in the television movie The Broken Chain with Pierce Brosnan.

In 1992, after a 16 year recording hiatus, Buffy released the album Coincidence and Likely Stories. Recorded at home on her computer, the album contained the politically charged songs The Big Ones Get Away and Bury My Heart At Wounded Knee, both regarding the on-going plight of Native Americans. She followed up in 1996 with Up Where We Belong, an album in which she re-recorded a number of her greatest hits in more unplugged and acoustic versions, including Universal Soldier.

A gifted digital artist, her creations have been displayed at the Glenbow Museum in Calgary, the Winnipeg Art Gallery, the Emily Carr Gallery in Vancouver and the American Indian Arts Museum in Santa Fe.

In 2004, a track written and performed by her entitled Lazarus was sampled by Hip Hop producer Kanye West and performed by Cam'Ron and Jim Jones of The Diplomats. The track is called Dead or Alive.

She is an active member of the Baha'i Faith.

Power In The Blood

Soldier Blue - The Best Of The Vanguard Years

Running For The Drum

Up Where We Belong

The Best Of Buffy Sainte-Marie