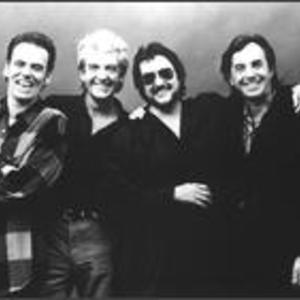 Little Village was formed in 1992 by Ry Cooder (guitar, vocal), John Hiatt (guitar, piano, vocal), Nick Lowe (bass, vocal) and Jim Keltner (drums). Their eponymous album met with lukewarm reviews and general commercial indifference. The group disbanded in late 1992. In 1993 their album was nominated for a Grammy Award as Best Rock Vocal Performance by a Duo or a Group. The four musicians first worked together as a unit -- albeit not under the Little Village name -- when recording John Hiatt's album "Bring The Family" in 1987.

The four musicians first worked together as a unit -- albeit not under the Little Village name -- when recording John Hiatt's album "Bring The Family" in 1987. Upon reconvening in 1992, the group's name was initially (and jokingly) announced as Hiatus. It was soon changed to Little Village in reference to a famous in-studio diatribe by Sonny Boy Williamson II.

Little Village recorded their first and last proper group album in mid-1992. The self-titled record featured a set of songs composed by all four group members. The songs were largely sung by Hiatt, although Lowe took lead on two songs and Cooder one.

Prior to its release, the Little Village album was heavily anticipated in some quarters. Bring The Family was (and still is) considered to be one of Hiatt's finest albums, and a reunion of the group that recorded it fostered great critical expectations. However, upon being issued Little Village met with only lukewarm reviews and general commercial indifference. The consensus was that the material on the album seemed somewhat thin, as if the composers were saving their best work for their solo careers. Nevertheless, the album was nominated for a Grammy in the "Best Album" category.

The Little Village album release was followed by a number of well-received live shows in the US and Europe. Nevertheless, the group disbanded in late 1992.