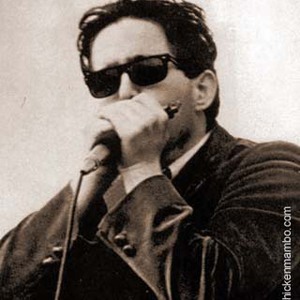 Paul Butterfield From Wikipedia, the free encyclopedia Paul Butterfield (December 17, 1942 ? May 4, 1987) was an American blues harmonica player and singer, and one of the earliest white exponents of the Chicago-originated electric blues style. Paul Butterfield, a lawyer's son, was born and grew up in Chicago. After studying classical flute as a teen, he developed a love for the blues harmonica, and hooked up with white, blues-loving, University of Chicago physics student Elvin Bishop (later of ?Fooled Around and Fell In Love? fame).

Paul Butterfield (December 17, 1942 ? May 4, 1987) was an American blues harmonica player and singer, and one of the earliest white exponents of the Chicago-originated electric blues style.

Paul Butterfield, a lawyer's son, was born and grew up in Chicago. After studying classical flute as a teen, he developed a love for the blues harmonica, and hooked up with white, blues-loving, University of Chicago physics student Elvin Bishop (later of ?Fooled Around and Fell In Love? fame). The two started hanging around great black blues players like Muddy Waters, Howlin' Wolf, and Junior Wells. Butterfield and Bishop soon formed a band with Jerome Arnold and Sam Lay (both of Howlin' Wolf's band). In 1963, a watershed event in introducing blues to white America occurred when this racially mixed ensemble was made the house band at the Chicago blues club Big John's. Butterfield was still underage, (as was guitarist Mike Bloomfield, who was already working there in his own band).

The Paul Butterfield Blues Band was signed to Elektra Records after adding Michael Bloomfield as lead guitarist. Their original debut album was scrapped, then re-recorded after the addition of organist Mark Naftalin. Finally, their self-titled debut, The Paul Butterfield Blues Band, was released in 1965. It had an immediate impact, serving as a wakeup call for a generation of musicians.

Prior to the summer of 1965, the Beatles' music (and much of the rest of the British Invasion) was the stuff of screaming kids. Serious musical aficionados viewed it as ?bubblegum.? The music of the ?hip,? ?in,? college crowd, along with the trend-setting musical elite, was folk music and acoustic protest songs, as played by folk's king and queen, Bob Dylan and Joan Baez. And folk music's Mecca was the annual Newport Folk Festival. At the Newport Folk Festival of 1965, Dylan closed the event with the help of Butterfield's band (sans Butterfield), a move considered controversial at the time by much of the folk music establishment.

Soon after the release of The Paul Butterfield Blues Band, Lay became sick and Billy Davenport took over on drums. The Butterfield Band's second album, East-West (1966 in music) reflected the music scene's interest in sitar great Ravi Shankar and other Eastern musicians. It was also critically acclaimed.

These two albums are essential from a music-history perspective. With the release of The Paul Butterfield Blues Band, the image of blues as 'old time music' was gone. Butterfield's band introduced modern 'Chicago-style' blues to mainstream white audiences. It alerted the music scene to what was coming, taught American rockers the blues and how to play an improvised, extended solo. In addition, beyond a shadow of a doubt, a root of psychedelic (acid) rock is the genuine fusion of Eastern and Western music styles in Butterfield's East-West.

At the height of the Paul Butterfield Blues Band's success, Mike Bloomfield formed The Electric Flag with Nick Gravenites and Bishop began playing lead guitar on The Resurrection of Pigboy Crabshaw (1967 in music). The album showed that Butterfield was moving to another musical direction, what with the horn section and a soulful, R&B-influenced groove. The album included David Sanborn, Bugsy Maugh and Phil Wilson, and proved to be the last of the Butterfield band's commercial successes.

In the same year, the Monterey International Pop Festival would showcase The Butterfield Blues Band, along with The Electric Flag, Ravi Shankar, and many others.

After 1968's release In My Own Dream, both Elvin Bishop and Mark Naftalin left at the end of the year. Billy Davenport and new guitarist Buzzy Feiten joined the band on its 1969 release Keep On Moving which was received coolly by the music press. Though the Butterfield band was floundering commercially, it was still popular enough to play at the Woodstock Festival ? although their performance was not included in the resulting Woodstock film. In 1969 Paul Butterfield also took part in an all-star blues jam with Muddy Waters, Otis Spann, Michael Bloomfield, Sam Lay, Donald "Duck" Dunn and Buddy Miles, which was recorded and released as Fathers And Sons.

After the releases of Live and Sometimes I Just Feel Like Smiling in 1970, Butterfield broke up the band and returned to Woodstock, NY. He formed a new group including guitarist Amos Garrett, Geoff Muldaur, Maria Muldaur, pianist Ronnie Barron and bassist Billy Rich and named it Better Days. This group released Paul Butterfield's Better Days and It All Comes Back in 1972 and 1973, respectively. Though both were far from commercial successes, both albums were received well by critics. The late 1970s and early 1980s saw Butterfield as a solo act and a session musician doing television appearances every now and then and releasing a couple of albums to a small and devoted cult following. Paul Butterfield died in 1987 from a drug and alcohol overdose.

The dramatic impact on the course of rock & roll by the Butterfield Blues Band with the release of their first album, ?The Paul Butterfield Blues Band,? and the song ?Born In Chicago,? in particular, was pivotal. They, along with British acts The Rolling Stones, The Animals, The Yardbirds, John Mayall's Bluesbreakers and others, including Butterfield's main competitor in Chicago, singer/harp player Charlie Musselwhite, helped introduce young white America to the blues, influencing hundreds of bands from the Grateful Dead to the Allman Brothers, and launched the brief reign of Michael Bloomfield as America's most influential rock guitarist.