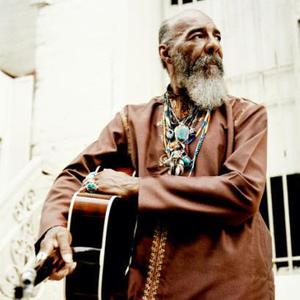 Born in the Bedford-Stuyvesant section of Brooklyn, Richie Havens moved to Greenwich Village in 1961 in time to get in on the folk boom then taking place. Havens had a distinctive style as a folksinger, appearing in such clubs as the Cafe Wha? His guitar set to an open tuning, he would strum while barring chords with his thumb, using it essentially as percussion while singing rhythmically in a gruff voice for a mesmerizing effect.

Havens was signed to Douglas Records in 1965 and recorded two albums that gained him a local following. In 1967, the Verve division of MGM Records formed a folk section (Verve Forecast) and signed Havens and other folk-based performers. The result was Havens's third album, Mixed Bag. It wasn't until 1968 and the Something Else Again album, however, that Havens began to hit the charts -- actually, Havens's fourth, third, and second albums charted that year, in that order. In 1969 came the double album Richard P. Havens 1983. Havens's career benefited enormously from his appearance at the Woodstock festival in 1969 and his subsequent featured role in the movie and album made from the concert in 1970. His first album after that exposure, Alarm Clock, made the Top 30 and produced a Top 20 single in "Here Comes the Sun." These recordings were Havens's commercial high-water mark, but by this time he had become an international touring success. By the end of the '70s, he had abandoned recording and turned entirely to live work.

Havens came back to records with a flurry of releases in 1987: a new album, Simple Things; an album of Bob Dylan and Beatles covers; and a compilation. In 1991, Havens signed his first major-label deal in 15 years when he moved to Sony Music and released Now.

Nobody Left To Crown

Live At The Filene Center

Dreaming As One: The A&M Years

Grace Of The Sun

Cuts To The Chase

Resume: The Best Of