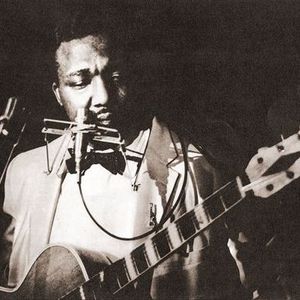 J.B. Lenoir is an outstanding blues singer, songwriter who was born in Monticella, Mississippi (March 5,1929). J. B. Lenoir was known in the 50s for his particular zebra-patterned costumes and his brilliant female-like voice but he was a very influential musician and composer playing electric guitar. His band included piano (Sunnyland Slim), saxophone (J. T. Brown), and drums (Alfred Wallace). In this period he wrote several blues standards including Don't Dog Your Woman, Mama Talk To Your Daughter, and Don't Touch My Head.

He was also known with his political content relating to racism and war in his lyrics. "Vietnam Blues" and "Alabama Blues" were major examples.

Despite the angry lyrics of many of his songs, Lenoir sang in a disarmingly sweet, laid-back style, and he was widely known as an exceptionally friendly and gentle person. He befriended and encouraged many young blues artists both black and white. He died on April 29, 1967 in Urbana, Illinois from a heart attack related to injuries he suffered in a car accident three weeks earlier. His untimely death is lamented by John Mayall in the song, "Death of J. B. Lenoir". He was also honored by Wim Wenders in the movie "The Soul of a Man"

If You Love Me

Topical Bluesman: From Korea To Vietnam