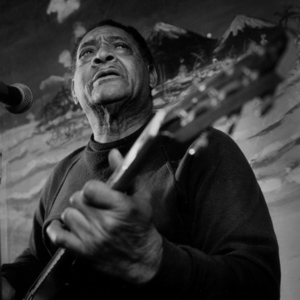 Junior Kimbrough (born David Kimbrough in Hudsonville, Mississippi, July 28, 1930; d. Holly Springs, Mississippi, January 17, 1998) was an American bluesman from Mississippi most notable for his recorded output in the 1990s. Kimbrough lived in the North Mississippi Hill Country around Holly Springs. He recorded for the Fat Possum Records label, beginning in his sixties. His style of modern electric blues was marked by its hypnotic modal guitar rhythms, backwoods singing style and nocturnal lyrics. He often collaborated with members of fellow Mississippi bluesman R.L. Burnside's family.

Kimbrough debuted on record in 1961, though he sporadically recorded, released a few singles on independent labels during the 1960s, 70s and 80s. In the 1980s he began performing with his backing band, The Soul Blues Boys, who first appeared on his 1992 debut full-length All Night Long. Beginning around 1992, he operated a juke joint known as "Junior's Place" in Chulahoma, Mississippi, which attracted visitors from around the world, including members of U2 and The Rolling Stones. Kimbrough's sons, musicians Kinney and David Malone Kimbrough, kept it open following his death, until it burned to the ground on April 6, 2000.

Junior Kimbrough died in 1998 following a stroke. He was the father of 36 children from various relationships.

Meet Me In The City

Most Things Haven't Worked Out