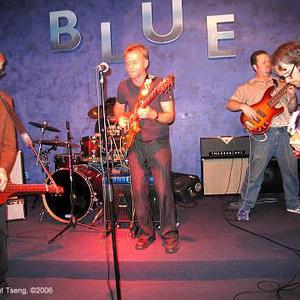 Delta Moon formed in the late 1990s when Mark Johnson and Tom Gray lived within a few blocks of each other in Atlanta's Inman Park neighborhood. They got together regularly to work up arrangements of classic blues and original songs for two slide guitars. Soon, joined by singer Gina Leigh and a rotating cast of percussionists, drummers, and bassists, the band was playing festivals and nightclubs around Atlanta and the South.

Following the March 2002 release of their debut CD, "Delta Moon," the band started ranging farther from home. What really launched them on the national scene was when Delta Moon beat out over 50 other competitors to win the prestigious International Blues Challenge in Memphis in January 2003. In June of that year they released their second CD, "Live," recorded at Tree Sound Studios in Atlanta. The band was voted the Best Overall Music Act in Atlanta by Creative Loafing Readers that summer.

After a year of touring North America and England, in June 2004 the band released "Goin' Down South." Drummer Scott Callison, who had played with the band in its early days, rejoined in 2003. In fall 2004 Gina left the band, and six weeks later Kristin Markiton became Delta Moon's new female singer. "Howlin'" was released in 2005 and has been their most successful CD to date.

The band has come full circle with the latest changes in lineup, and Delta Moon is being re-born (again) as a tight 4 piece band featuring the dual slide guitars of Tom and Mark and the songwriting, as always, of Tom Gray. They are recording a new CD utilizing Ted Pecchio and Tyler Greenwell, the energetic rhythm section behind The Codetalkers. But in addition to great songs and critcally acclaimed CD's, this is a band that is best appreciated LIVE. Swampy, sinewy, improvisational, Southern roots music at it's finest.

Originally from Arlington, Virginia, Tom has written songs recorded by Cyndi Lauper (?Money Changes Everything?), Carlene Carter, Manfred Mann, and many other artists. Tom was the leader of the 1980s rock band The Brains and has since recorded and performed with a long list of vocalists and groups.

A dedicated and talented player who is relentless in his quest for tone, Mark moved south from Ohio and formed a band called The Rude Northerners, then worked with the Atlanta band The Crawdads before becoming a founding member of Delta Moon. Mark made up the band's name after visiting Muddy Waters' cabin near Clarksdale, Mississippi.

Turn Around When Possible Live Vol. 2