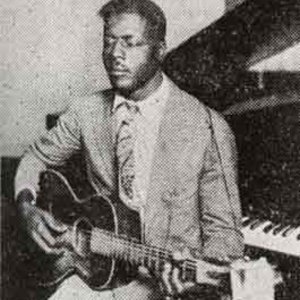 Blind Willie Johnson (Willie Johnson, Brenham, Texas, January 22, 1897 ? Beaumont, Texas, September 18, 1945) was an American singer and guitarist whose music straddled the border between blues and spirituals. While the lyrics of all of his songs were religious, his music drew from both sacred and blues traditions. Among musicians, he is considered one of the greatest slide or bottleneck guitarists, as well as one of the most revered figures of depression-era gospel music.

While the lyrics of all of his songs were religious, his music drew from both sacred and blues traditions. Among musicians, he is considered one of the greatest slide or bottleneck guitarists, as well as one of the most revered figures of depression-era gospel music. His music is distinguished by his powerful bass thumb-picking and gravelly false-bass voice, with occasional use of a tenor voice.

Blind Willie Johnson was born in 1897 near Brenham, Texas (before the discovery of his death certificate, Temple, Texas had been suggested as his birthplace). When he was five, he told his father he wanted to be a preacher, and then made himself a cigar box guitar. His mother died when he was young and his father remarried soon after her death.

Johnson was not born blind, and, although it is not known how he lost his sight, Angeline Johnson provided the following account to Samuel Charters. She said when Willie was seven his father beat his stepmother after catching her going out with another man. The stepmother then picked up a handful of lye and threw it, not at Willie's father, but into the face of young Willie.

It is thought that Johnson was married twice, first to a woman with the same first name, Willie B Harris, and later to a young singer named Angeline, who was the sister of blues guitarist L.C. Robinson. No marriage certificates have yet been discovered. As Angeline Johnson often sang and performed with him, the first person to attempt to research his biography, Samuel Charters, made the mistake of assuming it was Angeline who had sung on several of Johnson's records. However, later research showed that it was Johnson's first wife.

Johnson remained poor until the end of his life, preaching and singing in the streets of Beaumont, Texas to anyone who would listen. A city directory shows that in 1944, a Rev W J Johnson, undoubtedly Blind Willie, operated the House of Prayer at 1440 Forrest Street, Beaumont, Texas. This is the same address listed on Blind Willie's death certificate. In 1945, his home burned to the ground. With nowhere else to go, Johnson lived in the burned ruins of his home, sleeping on a wet bed. He lived like this until he contracted pneumonia two weeks later, and died. (The death certificate reports the cause of death as malarial fever, with syphilis and blindness as contributing factors.) In a later interview his wife said she tried to take him to a hospital but they refused to admit him because he was black, while other sources report that, according to Johnson's wife, his refusal was due to his blindness. Although there is some dispute as to where his grave is, members of the Beaumont community have committed to finding the site and preserving it.

His father would often leave him on street corners to sing for money, where his powerful voice left an indelible impression on passers-by. Legend has it that he was arrested for nearly starting a riot at a New Orleans courthouse with a powerful rendition of "If I Had My Way I'd Tear the Building Down", a song about Samson and Delilah. According to Samuel Charters, however, he was simply arrested while singing for tips in front of a Custom House, by a police officer who misconstrued the title lyric and mistook it for incitement.

Johnson made 30 commercial recording studio record sides in five separate sessions for Columbia Records from 1927?1930. On some of these recordings Johnson uses a fast rhythmic picking style, while on others he plays slide guitar. According to a reputed one-time acquaintance, Blind Willie McTell (1898-1959), Johnson played with a brass ring, although other sources cite him using a knife. The only known photograph of Johnson does not reveal any fretting instrument.

Some of Johnson's most famous recordings include "In My Time of Dying" (identified as "Jesus Make up My Dying Bed" on his recordings), the stirring "It's Nobody's Fault But Mine", his rendition of the famous gospel song "Let Your Light Shine On Me", as well as the raw, powerful "Dark Was The Night, Cold Was the Ground", where he sings in wordless hum and moans about the crucifixion of Jesus. This song was a "moaning" piece related to the Bentonia school of blues practiced by such "eerie voiced" artists as Skip James and Robert Johnson.

On 14 of his recordings he is accompanied by Willie B Harris or an as-yet-unidentified female singer. This group of recordings includes "Church I'm Fully Saved Today", "John the Revelator" , "You'll Need Somebody on Your Bond", and "Keep Your Lamps Trimmed and Burning".

His records have kept his music tremendously influential and his songs have been covered by several popular artists, including Led Zeppelin (who included his photograph on their second album), Bob Dylan, The 77s, Beck, Phil Keaggy and The White Stripes (who have covered "John the Revelator", as well as covering "Motherless Children Have A Hard Time" and "Lord, I Just Can't Keep From Cryin'" live). "John the Revelator" was also recorded by delta blues musician Son House, and "Keep Your Lamp Trimmed and Burning" was recorded by another delta blues musician, Fred McDowell. In 1968, British group Fairport Convention recorded a cover of "Dark Was The Night, Cold Was The Ground" under the title "The Lord is in this Place...How Dreadful Is This Place". "If I Had My Way I'd Tear the Building Down" Gary Davis recorded a a substantially reworked version of the song retitled as "Samson and Delilah". Davis received the royalties when it was recorded by Peter, Paul, and Mary; it was frequently performed by the Grateful Dead and appears on the studio album Terrapin Station; Bruce Springsteen has performed a version of the song live with the Seeger Sessions Band, In the opening scene of the second season of Terminator: The Sarah Connor Chronicles Shirley Manson sings a version of this song. "Nobody's Fault But Mine" has also been covered by Mason Jennings, Nina Simone, and was modified by Led Zeppelin. Nick Cave has performed "John the Revelator" live, and based his song "City of Refuge," from his band the Bad Seeds' 1988 album Tender Prey, on the "Blind" Willie song of the same name. In the liner notes of a 2002 record by Derek Bailey, Marc Ribot compared "Dark Was The Night, Cold Was the Ground" to the music of Django Reinhardt and the avant garde guitarist Bailey. Many of his songs, and those of Rev. Gary Davis, were recorded in the late 1980s by gospel blues musicians Glenn Kaiser and Darrell Mansfield, on their album Trimmed & Burnin. In 1991 Bruce Cockburn covered "Soul of a Man" on his album Nothing But A Burning Light, the title in itself a line from the same song. In 1994 Ben Harper added a short cover excerpt of "By and By I'm Going To See The King" as a hidden track on his debut album "Welcome To The Cruel World". "John the Revelator" sung by Taj Mahal is featured on the soundtrack of Blues Brothers 2000, ),

Johnson's recordings and legacy have crossed over into other media and cultural contexts. Dark Was The Night, Cold Was the Ground was included on the Voyager Golden Record, sent into space with the Voyager spacecraft in 1977; this piece was used in the widely seen science show Cosmos: A Personal Voyage by Carl Sagan in 1980. This recording also got Johnson mentioned on an episode of the television series The West Wing (see "The Warfare of Genghis Khan"); the fictional Deputy White House Chief of Staff Josh Lyman used Johnson's recording to show the depth and soul behind the space program. As mentioned by Lyman, Johnson's music left the solar system on December 16, 2004. Dark Was The Night has also been covered by Jack Rose.

Ry Cooder, who based his desolate soundtrack to Paris, Texas on "Dark Was the Night, Cold Was the Ground", described it as "the most soulful, transcendent piece in all American music."
The song is also used in Pier Paolo Pasolini's The Gospel According to St Matthew; Walk the Line, a biopic of country singer Johnny Cash; and The Devil's Rejects, a serial killer film by rocker Rob Zombie.

The Best Of Blind Willie Johnson

Dark Was The Night