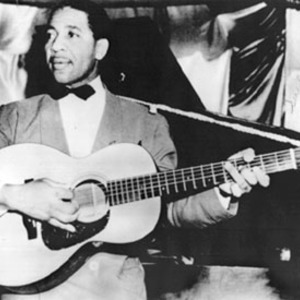 Alfonzo "Lonnie" Johnson (February 8, 1894 ? June 6, 1970) was a pioneering blues and jazz singer/guitarist born in New Orleans, Louisiana. There is some dispute over the year of his birth, but 1894 is what appears on his passport. He was a pioneer of jazz guitar as the first to play single-string guitar solos. Raised in a family of musicians, Johnson studied violin and guitar as a child, but concentrated on the latter throughout his professional career.

In the early 1920s, Johnson worked with the orchestras of Charlie Creath and Fate Marable on riverboats, but he made St. Louis his home in 1925. There he entered and won an Okeh Records blues contest that resulted in his making a series of memorable recordings for the label between 1925 and 1932, including guitar duets with Eddie Lang and vocal duets with Victoria Spivey. In the 1920s, Johnson also made guest appearances on records by Louis Armstrong and his Hot Five, the Duke Ellington orchestra, and The Chocolate Dandies, playing 12-string guitar solos in an extraordinary, pioneering single-string style that greatly influenced such future jazz guitarists as Charlie Christian and Django Reinhardt, and gave the instrument new meaning as a jazz voice.

Lonnie Johnson's career was a rollercoaster ride that sometimes took him away from music. In between great musical accomplishments, he found it necessary to take menial jobs that ranged from working in a steel foundry to mopping floors as a janitor. He was working at Philadelphia's Benjamin Franklin Hotel in 1959 when WHAT-FM disc jockey Chris Albertson happened upon him. Albertson succeeded in securing for Johnson a Chicago engagement at the Playboy Club, which launched yet another comeback. Johnson subsequently performed with Duke Ellington and his orchestra and with an all-star folk concert, both at Town Hall, New York City.

He also toured Europe and recorded several albums for the Prestige Bluesville label, some with Elmer Snowden, and one with his Okeh vocal partner, Victoria Spivey. To his great regret, Johnson was always tagged as a blues artist, and he found it difficult to be regarded as anything else. "I had done some singing by then," he explained when asked why he entered the Okeh contest, "but I still didn't take it as seriously as my guitar playing, and I guess I would have done anything to get recorded--it just happened to be a blues contest, so I sang the blues."

Johnson died in Toronto, Ontario, Canada, June 16, 1970 of complications resulting from a 1969 auto accident. He was posthumously inducted into the Louisiana Blues Hall of Fame in 1997.

One of Elvis Presley's earliest recordings was Johnson's blues ballad, "Tomorrow Night", which was also recorded by LaVern Baker

Bob Dylan wrote about the performing method he learned from Johnson in Chronicles, Vol. 1. Dylan thinks Robert Johnson had learned a lot from Lonnie.