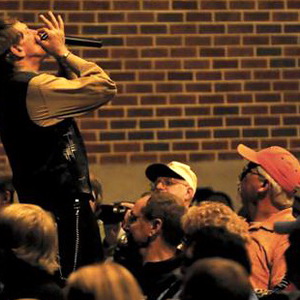 Bill Homans, a.k.a "Watermelon Slim", has a storied past from which he draws experience and fodder for the fourteen tracks on the new Watermelon Slim & The Workers CD. The record is Slim's third in four years and his debut release for Toronto-based NorthernBlues Records, where it's the latest in a string of critically acclaimed projects by artists such as Otis Taylor, David Jacobs-Strain, Janiva Magness and others. Despite playing his first paid gig at 18 and spending more than 30 plus years as a musician, it was only recently Bill 'Watermelon Slim' Homans manifested his life pursuit.

Despite playing his first paid gig at 18 and spending more than 30 plus years as a musician, it was only recently Bill 'Watermelon Slim' Homans manifested his life pursuit.

With the 2003 release of his critically acclaimed CD, Up Close and Personal, Watermelon Slim has become officially recognized as a seasoned newcomer and one of the most exciting and legitimate contemporary blues artist with accolades that include a 2005 W.C. Handy Nomination for Best New Artist Debut.

Watermelon Slim and his band The Workers are now exclusively represented by the agency representing Walter Trout, Tishamingo, Tinsley Ellis, John Lee Hooker, Jr., Kenny Neal, and others. In 2006 Slim launches into the next phase of his musical career with a new record, new label, new booking agent, and solid reputation, recognition and buzz preceding him. And although it seems overnight, it's been a long time coming.

While serving in Vietnam and laid up in an Army hospital Slim taught himself left-handed backward slide guitar using a $5 balsawood guitar using his Zippo lighter as the slide. Officially Homans first appeared on the music scene in the early 1970s as the only Vietnam veteran to record a full length LP album during the Vietnam War. It was a 1973 protest-tinged "underground" release entitled Merry Airbrakes, recorded and produced in Boston. In subsequent years, original material from that record was reissued and performed by anti-establishment icons such as Country Joe McDonald.

Notwithstanding some watermelon farming and academic success in the 1980s, Slim stroked his itinerant side and turned to truck driving. After 12 years or so of gear-jamming, and with a family to support, Slim tried again to re-invent himself, earning a masters degree in History, and high school teaching endorsements, at Oklahoma State University. However, four days after achieving his MA, with tuition loans mounting, Slim went back to trucking, hauling industrial waste for thankless bosses at hourly wages, all the while his id yearning for release of the musician inside.

His brush with death gave him a new perspective on mortality, direction and life ambitions.

He says, "Everything I do now has a sharper pleasure to it. I've lived a fuller life than most people could in two. If I go now, I've got a good education, I've lived on three continents, and I've played music with a bunch of immortal blues players,. I've seen an awful lot and I've done an awful lot."

With a new determination Slim cut the 2002 release Big Shoes to Fill as a calling card and his official intro into the blues genre. On the days he wasn't trucking, he traveled as far and wide as possible to perform. His southern-style, blue-collar approach to the blues met with resounding reaction from newfound fans, critics, promoters and the grass roots blues scene in venues as far away from Oklahoma as San Francisco and New York City. Slim had finally found his calling.

In late 2003 Slim finished recording the critically acclaimed Up Close & Personal, and the blues community officially recognized him as one of the best contemporary international blues artists with a nomination for a 2005 W.C. Handy Award for Best New Artist Debut and charted as the #1 Southern Blues CD of the Year from Real Blues Magazine.

At 56 Slim finds himself chasing his dreams with a healthy heart, an impassioned fan base, and the new record deal that came and found him

Slim's humility shows when he talks about his current band members, veteran Oklahoma road warriors who have been touring with him for the past two years. He says, "The band I'm playing with is largely responsible for my recent success. They're the reason I'm getting anywhere 'cause they help people take me seriously. We have recorded this new record as a representation of the full band's live performance, hence the band's name in the CD title."

With this release Slim aims to create a comparable reputation to that he's created in the United Kingdom on tour in 2004 and 2005. Over the last couple of years he's been impressing festival and club audiences with his musicianship and was featured on the BBC World Service Programme in addition to other national media coverage.

Church of the Blues

Escape From The Chicken Coop