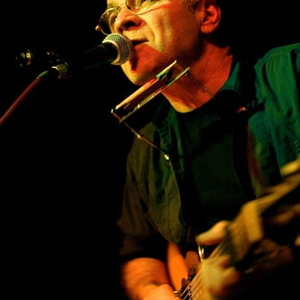 Ray Bonneville calls himself a North American. Born in Canada, he moved to the Boston area in his early teens where he started playing guitar and harmonica. His last 30 or so years have seen him seeking adventure and playing music throughout the world. Being a dual citizen allows him the freedom to live between Montreal, Canada and Austin, Texas. Bonneville is a distinctive artist, a man who cooks up a deep groove, blending a unique percussive electric guitar style, a weathered voice, and soulful rack harmonica into image provoking songs that can be believed.

Bonneville is a distinctive artist, a man who cooks up a deep groove, blending a unique percussive electric guitar style, a weathered voice, and soulful rack harmonica into image provoking songs that can be believed. His thumb pulses and thumps, his index finger hooks and brushes out a melody, and his hand slaps the guitar for a snare-like effect. He sometimes uses a slide, always plays through a Fender tube amp, and brings his foot down on an amplified piece of plywood on the floor for added percussion. It is a powerful and visceral sound with a lot of forward momentum.

"When I first heard good blues and country music I was very young, but I felt a deep stirring excitement within, which told me right then what to do with my life," says Bonneville, remembering his introduction to roots music in the Boston area during the early to mid 1960s. Over the next decade, Bonneville honed his sound up in the Northeast, Colorado and Alaska, and then moved around between Seattle, New Orleans, and Paris, France in the 1980s. He recorded his first album, On The Main, in 1993, and now has five albums out; his sixth is on the way.

In the streets and clubs of New Orleans during the eighties, is where Bonneville soaked up the prevalent back-side of the beat attitude that ran through a lot of the music being played down there. "There were so many great drummers to learn groove and time from, great piano and guitar players to be influenced by, and man, the singers and horn players just made your heart go wild with excitement! This was the place that influenced me the most," he says. "It was infectious. I learned that solid, but laid back rhythm is like a tightrope on which the notes and words can do their dance."

Ray won a prestigious Juno Award, the Canadian equivalent of a Grammy, in 1999, for his third album, Gust of Wind. His next release, Rough Luck, and his fifth album, Roll It Down, were also nominated for the coveted award.

Ray continues to tour and write, and is currently working on a new recording, his sixth, slated for release to the world on the Red House Records label in the spring 2007. It will be called Goin' by Feel.

Says Bonneville: "I'm deeply in love with playing live music. It's the time and place where I really live, where I feel the most alive. When a show is over, I can't wait to get down the road to the next one, always looking to get back onto another stage and seek out another groove.