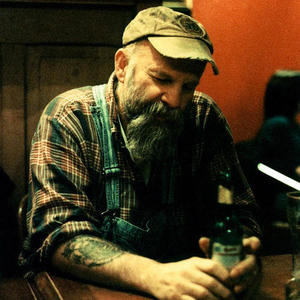 Steve Wold, more commonly known as Seasick Steve, is an American bluesman, although he rather would be called "a song and dance man." He plays guitars (mostly personalised), and sings. When asked about his nickname, Steve said: "because it's just true: I always get seasick." He is a 21st Century blues man, who reaches back to the old traditions but also has a punk sensibility, and a gravelly, soulful voice.

He is a 21st Century blues man, who reaches back to the old traditions but also has a punk sensibility, and a gravelly, soulful voice. Superb live and famous for his 3 string Trance Wonder guitar (though he does play 6-string more often, and a one-string diddley bow) he has played with everyone from Lightnin' Hopkins and John Lee Hooker to Modest Mouse and the Fat Possum dudes. He was the star of the New Year's Eve 2007 Jools Holland Hootenanny on BBC TV and has played many festivals which he has taken by storm.

When Wold was four years old, his parents split up. An old man from Mississippi, called K. C. Douglas, who wrote the song " Mercury Blues" and used to play with Tommy Johnson, taught him to play guitar at age 8. He left home at 13, and spent many years living on the streets in the States. He used to travel long distances by hopping freights as a hobo.

Before becoming a professional musician, Wold went through several jobs, including being a carnie, cowboy and a migrant worker. In the sixties he started touring and performing with fellow blues musicians, and in the nineties he worked as a recording engineer and producer.

Wold travelled extensively, living in 56 different houses in the 25 years of marriage with his Norwegian wife. Recently Wold has stayed in Norway after a heart attack made him consider staying in one place.

After moving to Norway, Wold came out with his first album, entitled "Cheap", recorded with a Swedish band called The Level Devils as his rhythm section. His debut solo album, "Dog House Music" was released by Bronzerat on 26 November 2006.

Wold made his first UK television appearance on Jools Holland's 'Annual Hootenanny' BBC TV show (Broadcast on New Year's Eve 2006) where he performed a live rendition of "Dog House Boogie" on the 'Three Stringed, Tranz Wonder' and 'The Mississippi Drum Machine' (see below). After that show his popularity suddenly boomed, as he explained in an interview:

"I can't believe it, all of the sudden I'm like the cat's miaow!"

He has been well received in the U.K, winning the MOJO Award for Best Breakthrough Act. In 2007 he was invited to a number of large UK festivals, which resulted in him playing more UK festivals than any band in that year.

He was one of the highlights at the Reading Festival 2007 playing to a packed Carling tent. He also played at many other festivals that year such as The Big Chill, Bestival and playing a storming well received one off set at the Cambridge Folk Fest after being personally recommended by Mark Radcliffe.

Steve toured early in 2008, playing in a number of venues in the UK. He was joined by a drummer on stage, Dan Magnusson, who formerly played with his backing band, the Level Devils. KT Tunstall also dueted with Steve at one concert.

On 4th July 2008, he played at Roskilde Festival, Denmark. The press was ecstatic saying that he gave the best performance of all artists at Roskilde. He was also seen at Latitude, T in the park, Oxegen, Leeds/Reading and Fuji Rock festivals. He was well received at the Glastonbury festival, playing the Pyramid Stage before 65,000 people.

Steve has also has been the 'Star in a Reasonably Priced Car' in the 7th episode of series 14 of Top Gear! (first shown 3rd January 2010 on BBC2). He revealed that he has owned hundreds of cheap cars ("you buy one for 50 dollars and when that wears out, you just buy another") and his favourite is a 51 Chevy wagon and a tractor that are over here whilst in the UK and that he likes to plough!

Steve then played a few chords on a guitar made out of 2 morris minor hub cabs, much to presenter Jeremy Clarkson's glee.

Steve's time was 1:51.8 on a moist track, faster than Tom Jones which was good enough for him.

As well as an electric guitar and an acoustic guitar, Seasick Steve owns (and plays) a few obscure and personalised instruments such as these:

* The Three Stringed Tranz Wonder
o This is a normal guitar, but with only three strings. It has an old Harmony pickup added (with duct tape) and is played tuned to G, G and B using an E string in the A position, a D in the G position and a G in the B position. At his gigs, he often tells the story that he bought it for $75 in this condition in Como, Mississippi from a man named Sherman, who later told him he only paid $25 for it the day before. Steve vowed never to add another string, and that he would tour the world telling his story of how Sherman ripped him off. All in good fun as Sherman is a good buddy. A lot of the time he also adds (while picking up or putting away the guitar) that it is the "...biggest piece of shit in the world, I swear".

* The One Stringed Diddley Bow
o This is a one stringed string instrument played with a slide (He uses an old screwdriver for this purpose). It consists of a 2 foot long 2x4, with a semi-loose guitar string nailed to it at both ends. It was made especially for him by James 'Super Chikan' Johnson.

* The 'MDM', The Mississippi Drum Machine.
o A small wooden box that is stomped upon, providing percussion. It is decorated with a Mississippi licence plate, and a small piece of carpet.

Keepin' The Horse Between Me And The Ground CD2

Keepin' The Horse Between Me And The Ground CD1

Keepin The Horse Between Me And The Ground

Write Me A Few Lines (EP)