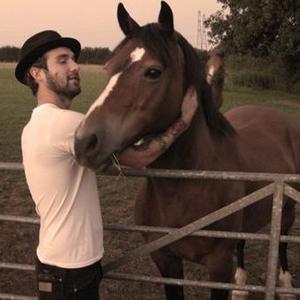 William Elliott Whitmore (born May 11, 1978, Iowa, United States) is an American blues singer and musician from Lee County, Iowa. He has recorded a number of albums released on Southern Records, and now is a member of the Anti Records family. His act consists mostly of playing the banjo or guitar while singing, though on occasion he performs a cappella. While he has earned much acclaim from the folk, blues and alt-country communities, he is also rooted in the hardcore punk community, by paying, for example, a homage for the worldwide spread icon of Bad Religion.

Hailing from a horse farm along the banks of the mighty Mississippi River, Whitmore has developed an intense love and spiritual understanding of the land, which he flawlessly conveys through his second Southern Records release, Ashes to Dust.

With a voice that sounds decades older than he is and full of emotional depth, William again delivers his unique signature style. While comparisons to the gravely voice of Tom Waits and the lyrical story telling of Johnny Cash fly throughout reviews of William's music, all agree that this Iowan is onto something more than just regenerating the music of the past.

Perhaps one of the reasons can be found in the instrumentation William uses in recording his songs, relying mostly on the basics while allowing his vocal delivery to provide a true sense of rural being. But clearly, it is heard in his stories: personal stories of death, love found and then lost, to never be found again. "Midnight", the opening track for instance, was born out of the feeling of displacement. "Diggin My Grave" which originally appeared on a limited edition self-titled cd, speaks of the need, for some reason or another, to kill yourself slowly. "Lift My Jug" (songs for Hub Cale) is a song of the first, honest to god hobo he ever knew and how meeting him at the young impressionable age of six, greatly influenced his life. The closing track, "Porchlight", is the story of William's father, one of a dying farmer's last request.

With live performances of a caliber to leave one completely stunned in silence, and an album full of songs not only from the heart but also from the heartland, William Elliott Whitmore's Ashes to Dust is one of the most interesting contributions to today's diverse collection of musical ingenuity.

Whitmore's 2009 release, Animals in the Dark, reached #50 on the Billboard Heatseekers chart.

Animals In The Dark

Hallways Of Always (With Jenny Hoyston)

Song Of The Blackbird