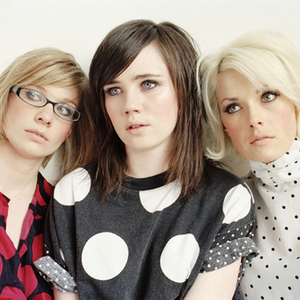 The Pipettes are Gwenno and Ani Saunders. They are a traditional girl pop group from Brighton, England. Both of the girls are singers in the group with Gwenno occasionally taking to the keyboard. The Pipettes (at the time consisting of Julia Clark-Lowes, Rose Elinor Dougall, and Becki Stephens) and their backing band, The Cassette, formed at a seaside party in Brighton in 2003 and have since wowed audiences with their trademark polka dot dresses, doowop anthems and choreographed hand movements.

Their first major single, Dirty Mind, reached #61 in the UK singles charts with the follow-up, Your Kisses Are Wasted On Me, reaching #35 in April 2006. Their album, We Are The Pipettes, was released on 17th July including the new single, Pull Shapes which reached #26 in the UK Top 40 Singles Chart, after being released on 3rd July. We Are the Pipettes reached #41 in the album charts after its first week of release. Judy was the 4th single to be released from We Are the Pipettes; it failed to reach the UK Top 40, coming in at #46. However, it did reach #1 on the Indie Chart.

In 2005, The Pipettes completed successful headline tours in the UK and Europe, as well as high-profile support slots with The Magic Numbers, Graham Coxon, British Sea Power and The Go! Team, that has won them fans in high places including Radio One DJ Huw Stephens, and Radio 2's Mark Radcliffe.

A very small tour of America took place in early 2007; every show played was sold-out, culminating in six successful showcases at SXSW 2007. A tour of the UK and Europe in April and May 2007 was followed by a tour across north america, coinciding with the release of the EP Your Kisses Are Wasted On Me in the US which reached #5. Through summer 2007 they played a number of festivals in Europe and Japan. October saw a tour of North America, although delayed by visa difficulties, along with the US launch of We Are The Pipettes, including two new songs. A Japanese launch followed with a Japanese tour in December, and 2008 was seen in by the band with a mini-tour in Australia.

In February 2008, Gwenno and Becki appeared at several events without Rose, namely a DJ set in Glasgow and three gigs with Mark Ronson in Brighton and London, leading to speculation that he would be producing their second album.

On April 18th 2008, The Pipettes announced the departure of Rose and Becki, meaning that the group now featured none of the original singers. They were replaced with Ani (Gwenno's sister) and a BRIT School graduate, Anna McDonald. They also reported they were currently demoing twenty to twenty-five new songs with a view to recording their second album in the summer of 2008.

The new lineup made its debut at Corsa Presents Bandstand with Mark Ronson on May 3rd 2008. The band performed Because It's Not Love (But It's Still A Feeling).

On November 12th 2008, the band announced another departure; this time of Anna, who had only been in the band for seven months. Anna's unexpected decision to leave and concentrate on her songwriting meant the band had to cancel their appearance at S?n Festival.

On February 11th 2009, the band posted a video blog on their website to introduce the newest Pipette, Beth Mburu-Bowie. With Beth, they are currently finishing work on their second album.

We are the Pipettes