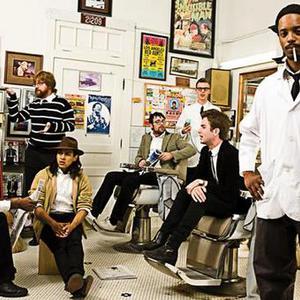 Black Joe Lewis & The Honeybears is a blues band from Austin, Texas influenced by Howlin' Wolf and James Brown. Formed in 2006 and fronted by Black Joe Lewis, the rest of the band includes Zach Ernst, Bill Stevenson, Matthew Strmiska, Ian Varley, and the Hard Proof Honeybear Horns (Jason Frey, Derek Phelps, Joe Woullard.) After being signed by Lost Highway Records at SXSW they released their debut album Tell 'Em What Your Name Is! in March of 2009.

The album was produced by Spoon drummer Jim Eno.

The Difference Between Me & You

Livin' In The Jungle

Tell 'em What Your Name Is!