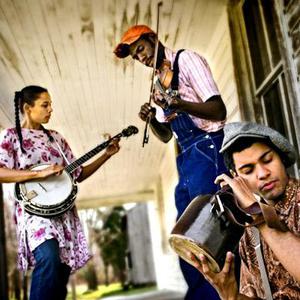 The Carolina Chocolate Drops are a group of young African-American string band musicians that have come to together to play the rich tradition of fiddle and banjo music in Carolina's Piedmont. Rhiannon Giddens and Justin Robinson both hail from Durham, North Carolina while Dom Flemons is native to sunny Arizona. Although they have diverse musical backgrounds, they draw their musical heritage from the foothills of North and South Carolina.

They have been under the tutelage of Joe Thompson, said to be the last black traditional string band player, of Mebane, NC and they strive to carry on the long standing traditional music of the black and white communities. Joe's musical heritage runs as deeply and fluidly as the many rivers and streams that traverse their landscape. They are proud to carry on the tradition of black musicians like Odell and Nate Thompson, Dink Roberts, John Snipes, Libba Cotten, Emp White, and countless others who have passed beyond memory and recognition.

Dona Got A Ramblin' Mind