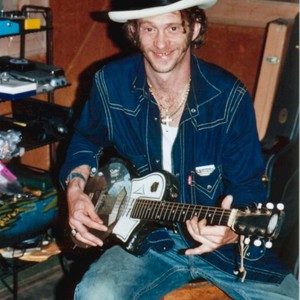 Guitarist, songwriter, vocalist and producer Jimbo Mathus grew up in Corinth, Mississippi. He first caught the public's ear in the 1990s with the hyper-ragtime vaudeville act, The Squirrel Nut Zippers. Since then, hes released many recordings of his own in a style he describes as Mississippi Music. Basically, Mathus says, "I combine the myriad styles of deep roots music in a type of alchemy. Blues, country, gospel and soul all go into the equation equally." His last outing called Knockdown South, was released on his own label and received much critical acclaim.

It was voted Number 2 for Best of 2005 by Honest Tune Magazine.

Mathus played a key role in Buddy Guy's Sweet Tea (2001) and Grammy winning Blues Singer (2004) as guitarist and arranger. He also runs the Delta Recording Service, a studio based in Clarksdale, MS and is sought out by many artists seeking the old school style of recording. One such artist was Elvis Costello, who recorded his Grammy nominated Monkey to Man single in Mathus' studio in 2005. He has produced two blues CDs that are nominated for WC Handy awards in 2006; Duwane Burnside's Under Pressue and Big George Brock's Club Caravan. Additionally, he contributed vocals on North Mississippi Allstars' 2006 Grammy nominated Electric Blues Watermelon.

All that being said, who is Jimbo Mathus really, and what is he trying to do to us?: "I break down walls and stereotypes with my music. I confuse people. I use Mississippi music, which is renegade music at heart, as my inspiration and motivation. I use it as a tool to reach people, to express my own feelings and continue to express those that came before me. I keep the old stories alive while they help keep me alive."

Dark Night Of The Soul (With Tri-State Coalition)